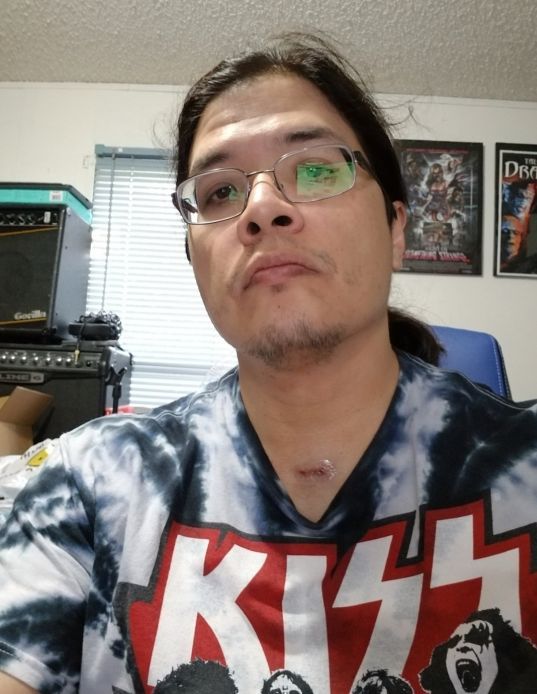 -While I’ve been doing some hints here and there at times via social media (read: vague-posting (HA!), yesterday was a post on my personal page on Facebook about me going into minor surgery (AKA biopsy) in the early morning. Obviously, this had been in the works for a while now. Some background info on this…

-Last year, while filming down in Virginia for JOHNNY Z in an abandoned house, I started having this dry cough. It progressed to the point to where, as I was being driven to the bus station on my last day there, I couldn’t stop coughing. Now, I’m not saying the house or that production is to blame. Other possibilities could be my diet at the time and overall failing health-due to some bad decisions made in late 2018, my life overall was deteriorating rapidly (click HERE for my 2018 Year in Review for some details) which including eating a lot of junk food regularly-to the point where, on set, I was the heaviest I’d ever been. The storm of depression was at hurricane levels at this point as well. It also could be some kind of virus. I guess what I’m trying to say is I don’t really know how this came about-only that it has happened and I have to deal with it.

-The thing is, for most of 2018 I was unemployed hence I had no health insurance. Considering how much things are costing me now (and that’s WITH health insurance), I can only imagine how much higher my bills would be. But once I did get health insurance and got past the grace period, I began to look into seeing what was going on. While the coughing had decreased, it was still happening every day. On top of that, there’s like this pressure around my throat, as well as phlegm build-up, which makes it sometimes hard to speak/sing. Considering that I still have music I want to release for CAROLINE BLUE (even though I’m working at a snail’s pace on all things CB-I’m still working on it) I wanted to find out what was going on and if I could get rid of this thing.

-So earlier this year I finally went to see a doctor about it. Things started with a chest X-ray but rapidly progressed to two cat scans. Not a good sign. One was centered around my throat/chest region, the other centered around my abdomen/pelvis area. Then I got the results: I had multiple enlarged lymph nodes. This could be from three things: infection, inflammation or, worse case, lymphoma-a slow type of cancer. Considering how health-conscious I am (with the exception of junk food in the last few years), that took me by surprise. Cancer. Me possibly having that. It’s amazing what goes thru the mind when you receive news of that possibility.

-The doctors wanted to schedule me for a biopsy ASAP but I had to delay it due to filming on two productions where I had speaking roles- “Johnny Z” and TALES OF DRACULA: DRACULA MEETS THE WOLFMAN; especially the latter one where I had some big monologues to do. I’ve admitedly become a little paranoid as I’ve gotten older and tend to have this morbid mindset whenever something like this comes up-or even when, for example, I ever have to travel out of state for acting or whatnot. It’s to the point where I almost expect this to happen in order to be safe-if that makes any sense. I had two main concerns in regards to the biopsy-one which is resolved and the other-time will tell.

-The first was being put under via anesthesia. I’ve never had that happen to me before so there was that unknown factor to deal with. What if I’m one of those rare ones who don’t wake up? In addition, contrary to instruction, for some reason, I drank some water twice in the time period when I wasn’t supposed to before surgery. No food or drink at all for basically eight hours before the surgery. I thought the water was OK but it wasn’t. For those of you who may be wondering, here’s why. When you sleep, your muscles can still move involuntarily at times. When you’re under anesthesia, you are totally paralyzed. So one, there is a possibility of blood clots forming and two, if you ate or drank something, it just sits in your stomach. With the tubes down your throat, this can cause what is known as “aspiration pneumonia” which means your body starts to induce vomiting-which causes any food and/or drink you have to end up in your lungs. Not good. Luckily it was just water and not, for example, coffee with cream. The cream alone would cause a delay of six hours (!) for the surgery. Obviously, since I’m typing this on the day after, any worries about waking up are now behind me.

-The second concern is still ongoing. While under anesthesia, there’s a breathing tube put down my throat. You can see from the pic where the incision was made for the biopsy so I got a souvenir from the show (HA!). In addition to that, the doctor also wanted to insert a tube with a camera on it to get a detailed look of the inside and outside of my lungs. As you can surmise, this would be a tight squeeze down my air pipe and. more specifically, my vocal cords. There is the possibility of them being damaged. Right after the biopsy, most of my neck was numb and, at the KISS concert later that night-walking towards The Amp-I coughed and spit out a thick chunk of bloody phlegm. Nice huh? As of today, the numbing has gone down to just right in the throat area. My diet is basically ice cream and other soft foods (a Big Mac is considered a soft food right?-HA!)-which has increased the pounds on me but here’s a surprise-at this moment, I’m sick of ice cream. Who the hell gets sick of ice cream? Maybe the anesthesia caused some brain damage? 🙂

-The only other thing that happened was my right calf was really in pain-to where I still have a slight limp walking as of today. Seems like I had a major leg cramp but, because I was asleep and paralyzed, I never knew about it till I woke up-and it tied for the soreness in my throat area so that was an experience.

-Now I just have to wait for the results. I was told that the doctor told my close friend Sarah R. (both her and her boyfriend Aaron drove me to St. Joseph’s. There was the real possibility that I might have had to drive myself to this but they knocked some sense into me 🙂 ) that, while he wants to wait for the results, chances are very good that I don’t have cancer and what I do have can be treated. So if I can just get past paying off the medical bills-and if all goes well with my vocal cords (currently all of my high range and a good chunk of my mid-range are gone-and don’t worry, I won’t even attempt any singing till I totally recover)-I’ll be back to being all peachy keen-at least on this front.

-I just want to give a very deep thanks to all the people who responded to that Facebook post yesterday with well-wishes-as well as any in advance after I post this. It makes me feel like this moment from “The Jerk” with Steve Martin – albeit hopefully not after the 0:53 moment (HA!).

Hiya-this is WWJ & thanks for dropping by to my site! I hope you enjoy your visit to my home away from home online. If you have any questions, comments and /or concerns about this site, please let me know via the CONTACT page. Thanks & best wishes to you & yours!
View all posts by Wayne W. Johnson →
This entry was posted in HEALTH and tagged 2018 Year in Review, 2019, Anesthesia, Biopsy, cancer, Health, Johnny Z, Lymphoma, St. Joseph's Hospital, Steve Martin, surgery, Tales of Dracula: Dracula Meets The Wolfman, The Jerk, vocal cords, wayne w johnson, WWJ. Bookmark the permalink.