8/24/2019-ACTING-Recap from First Weekend Filming on “Tales of Dracula: Dracula Meets The Wolfman” 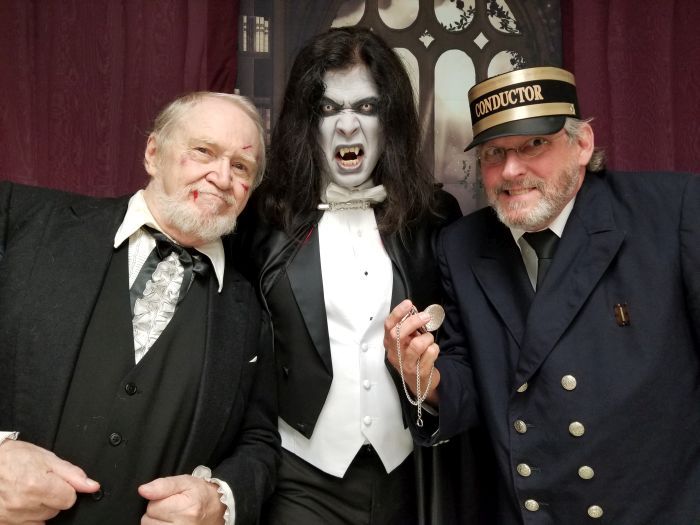 **WWJ Pictured with actors Mickey Ray (Dr. Von Helsing) & John Carey (The Conductor-to be revealed as…ah, that would be telling…)

8/16-8/18, 2019 – This weekend is the beginning of my REAL filming on “TALES OF DRACULA: Dracula Meets The Wolfman.” The time before was mainly a costume fitting (which I did lose more weight this weekend to fit in the new costume a little better) and a shot of my cape-which anyone could’ve done but I insisted cause I was being a not-so-little bitch (HA!) 😀 The bus ride was a trial cause my seat was down halfway and I couldn’t adjust it, nor could I change seats. My neck/trapezius muscle got cramped as a result-and I can still feel it as I type this. Director Joe DeMuro picked me up and took me to my hotel room and then it was off to Wolfbain Productions Studios.

-It was great being reunited with a good chunk of the cast/crew from Tales 1. Jay Novelli (Father Boris) was now a producer for Tales 2 and had some cool stories about his time as Moe in a Three Stooges Tribute Act as well as other things like Star Trek. He also filmed some of the conversations from time to time. He, as well as John Carey (The Conductor-to be revealed as…ah, that would be telling…), took a bunch of the pics during this shoot. In addition to these actors were Mickey Ray (Von Helsing) and Tom Delillo (The Wolfman) – who I got to act out some scenes with. I think people will be pleasantly surprised at what is in store this time. Still faithful to the classics, but having said that, taking a few steps towards what I call “The DeMuroverse”-enough to be quite the head turner so to speak 🙂

-Of course, the whole of Wolfbain Productions was back as well. Ron Chamberlain was here to do my makeup and I bet I’m now in his Top 5 sweatiest actors he’s ever had to deal with-if not higher 😀 The new costume is awesome, but it IS three layers of clothing under hot lights. I was told that, at one point, the makeup was dripping off of me. There was a time where another hour or so was taken to re-apply the whole thing that’s how bad I was sweating it off. Of course, my hair had to go everywhere it wasn’t supposed to go as well. #thestruggleisreal 🙂

-I did some stuff with Mickey the first night and with Tom the second. Actress Casandra Hayes (“Elsa” from Tales 1) also stopped by on the second day to say “hey!” and infect everyone with her energy. I’ll have twelve of what she’s having please 🙂 While the first night ended before midnight, the second night lasted till around 4 AM. I also had to be up earlier the second night to take part in a makeup tutorial. We also got a visit from Marquis DeBlood (Mark Dickenson) who I did an interview with (with some “interesting” questions I might add) as well as discussing the possibility of a “re-match” between our characters from “Bataille De Sang.” Time will tell if that comes about…

-Sunday was more of a relaxed day until I got back on the bus. Did some power napping here and there. I seem to, as of late, be spending more time on various sets doing that. Getting older is a bitch 🙂 There were some great funny moments during this shoot-like how I mispronounced “respite” until it was spotted during rehearsal and how, after already a day of filming behind us, “Evil Audio Director” yells “CUT!” (causing a five-hour power struggle between him and Joe….no, no, no…:) and then saying-in the middle of a long monologue I was nailing -“Where are his fangs?” Again, we’ve all been shooting for over a day already when that was said. It was so cool if this whole exchange was caught on tape and added onto a blooper reel right? 🙂

-So, at this point, about 40% of filming is done for this. Hopefully, pickups are minimal. I’m sure ADR will have to be done and, for some reason, traffic got heavier whenever we started filming…It was great to be back in “Drac Mode” again. I hope I did the role justice. I did change my approach a little this time around let’s see if anyone notices and/or approves 🙂 Looking forward to knocking out the other scenes on this in the near future.