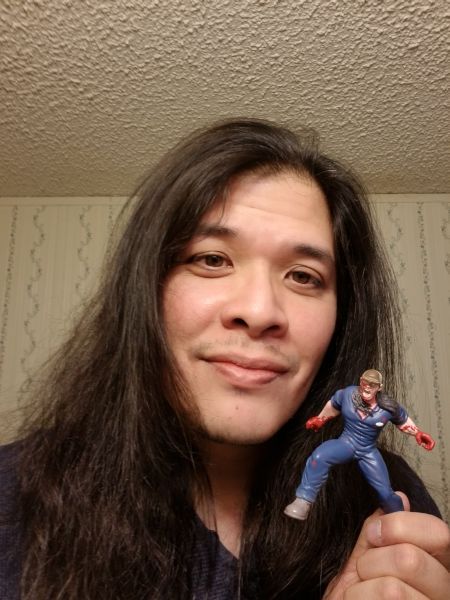 Here’s another entry in what has been a tradition here on my site for years: The Year in Review (2018 Edition). In last year’s entry, I mentioned how I felt like I was taking one step forward, several steps back (more often than not). In 2018, it was more like taking one step forward and taking many LEAPS back. 2018 was a hard and dismal year for me overall. With hindsight being 20/20, it was easy to see that what exploded for me in 2018 actually had its roots all the way back to 2015. More often than not, it came down to the decisions I made at the time-and many of them were the wrong ones to make-which led to a compounding effect. For example, the financial choices I made in the last few years set the seeds for what grew, like weeds on steroids, in late 2017-which, added to a few other things, turned most of 2018 into a financial and emotional tsunami for me. Perhaps the details will all come out in “WAYNE-THE BOOK” (remember those writing aspirations I have? 🙂 ) Most of 2018 saw me unemployed, falling deeper into debt, and going thru major bouts of depression. Did I mention that I’d put on weight? Up to a whopping 265 lbs (!). I was spiraling in a freefall-and the ground was fast approaching. I won’t say I hit rock bottom (and I will never say “it can’t get any worse”-cause it can always get worse…), but I would say I was in its orbit. If it wasn’t for my support system (which- unfortunately (for many years now)- has been dwindling in number), I don’t know if I’d even be here now. It was that bad…

-Having said that, I kept trying to slow my descent and reverse things-and it finally started to happen in mid-September. Since then, I’ve been slowly climbing out of that damn grave. As bad as it was for me, I did take in some valuable lessons from that crash and burn. My focus is sharper and, for the most part, I am making better decisions on what’s important and what isn’t. I’m still working my ass off. In fact, this past November saw me really grinding things out with a combination of “regular job” and acting to where, not only am I basically back to where I was financially before switching jobs, but that 2018 is-to date-my most profitable year as an actor. Not bad for a guy who was a fucking wreck months earlier right? 🙂 Let me break down things like I usually do (cause all two of you that read these things weren’t expecting me to go into “soap opera mode” were you? 🙂 )

-With Acting, 2018 saw me initially working on getting the “rust” off and moving forward. With this, I attended a number of auditions early on just for the sake of getting that rust off. I even made a few “You Tube” videos like “Taco Tuesday” and “Huey” (see below). You can see how puffy my face was getting due to the added weight (and eating at Taco Bell certainly wasn’t helping-HA!) as well as what I might have turned out looking as in “Huey” 🙂

-I was in a short horror film early on called MERCURY SCREAMS that was directed by Dan Wilder. It’s a “found footage” type film set in the early ’80s. For those wondering, I got my inspiration for wardrobe from a Billy Squire music video :). Having said that, wearing a pink shirt wasn’t doing the appearance of me gaining weight any favors and if you ever want to see a fat WWJ, watch this video when it’s released. Last update it’s being released on a horror compilation called CREEPYPASTA. I actually played a normal guy in this one.

-February saw the premiere of ROMEO 3000 (MAD ANGEL FILMS in association with WWJ PRODUCTIONS) at the Rome Capital Theater. Although incomplete (and why there had to be any type of “premiere” when it was I’ll never know…), the film got a great response from the many people there and some good press on top of it. Having said that, the film has been languishing in post-production Hell ever since. In 2018, all that was produced on this front was frustration. There’s more-but maybe that too has to be saved for “WAYNE-THE BOOK.” 🙂 One good thing that came about involves music, but I’ll get to that in that section. Right now-I can’t say what will happen to R3000. I hope it will be released one day and that it will be worth the wait. Time will tell…

-A number of projects I was in from previous years were either released this year or I was able to get a review copy of them. These include “Drive,” “The Lamb,” “The Last Rites of Van Helsing” and the commercial I did for Kinney Drugs. The short film “They’re Here” also made its debut. On top of that, I did a cameo in “Barely Coping” (Mad Angel Films) and was in a short horror film called “She Dances With Matches.” The former came out this year and hopefully the later will be out next year.

“Mohawk” (Directed by Ted Geoghegan) made its debut on Netflix and NIGHT OF SOMETHING STRANGE debut on SHUDDER-where it won in its Best of 2018 awards as “Most Polarized Film.” HOUSE SHARK (Directed by Ron Bonk) was also released this year. Both NoSS and HOUSE SHARK also made their debuts in Japan. Side note- In Japan, Noss is known as “Monster Motel.” In addition, “Transformation” (Directed by Brian Hewitt) was also released on DVD. I also reprised my role as “Johnny Red” for Pirates Weekend at Turning Stone Casino this year. On top of that, I played some extra roles in some higher level films that came thru CNY in late 2018. Not bad for a guy who’s a little rusty right? 🙂 Due to Non-Disclosure Agreements, I can’t reveal the names of the films or even post pics till the films are released. Hopefully in 2019. 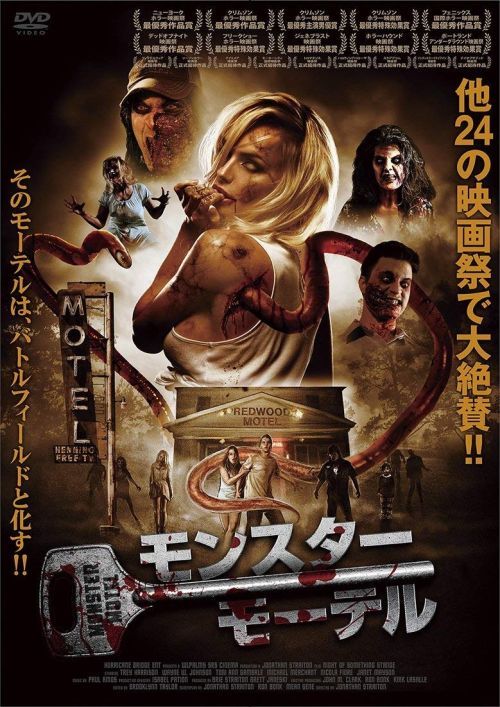 The most intense film I did this year was for JOHNNY Z. Directed by Jonathan Straiton. A serious horror / martial arts / zombie film. This has toppled NoSS as the most intense / brutal film I’ve done to date (to probably be toppled by NoSS 2 in 2020 :)). Since I was unemployed I spent months in the gym working to get that fat off of me-and I kind of succeeded. I was told by so many people I was “big” at that time-and I was. On a side note, since then, I’ve lost over 25 lbs so I hope I’m not needed for any re-shoots 😀 ). It was such a great experience and just brought it all home as to why I’m an actor. I have to say the Indiegogo Campaigns for both this and “House Shark” were awesome and are great case studies on how they are to be done (unlike some which I won’t name here…). “Johnny Z” is set to be released in 2019. Below is the teaser and I’m sure a trailer will be coming soon. In addition, below that is a video I made for the Johnny Z Indiegogo campaign. I was still working that other job and, as a result of that, I’d lost the majority of my voice at the time. You can still get some great merch from both campaign pages.

I also took part in a number of interviews-which can see be seen / heard HERE. Included are Interviews-#39 You’re Gonna Hate Me Now Podcast / Vol. 3 #43 Necrocasticon / Brassy World Podcast / Al Dosha / The Horror Syndicate. There were also some cool REVIEWS as well. Check out these two. Poor Cornelius… 🙂

Right now, there’s not too much happening in regards to acting in 2019. I did an audition for a short film for the role of an iconic character (and even got a standing ovation for it) but, as of right now, I don’t even know if it’s filming. There also a possibility of being in a higher level horror film come Summertime. One definite is “TALES OF DRACULA 2: Dracula Meets The Wolfman” starts filming next month. I will be reprising my role as Dracula in this so my weight better be under control 🙂 On a side note, for whatever reason, the decision was made to have the first Tales of Dracula on You Tube. Check it out below.

With Music, there was some activity with CAROLINE BLUE. Late last year I met up with music producer Emmett Van Slyke and, in a few hours, I recorded all the parts (save drums) for a brand new song called “My Fingers.” There will actually be two versions of the song. One will be labeled as the “Robo-Romeo Mix” due to it being played during the credits of “Romeo 3000.” This version will have more synth guitar on it and less lead guitar. The other version will be the standard CAROLINE BLUE version with less synth guitar and more lead guitar. The song is in the final mixing / mastering stages. I’m working to get more songs and some music videos done in 2019-maybe even a few shows. The CB site is STILL not fully ported over, but 75% of it is. On top of that, there’s a possibility that I will be joining a cover band on the side-one that plays stuff way different than what people would associate with me. 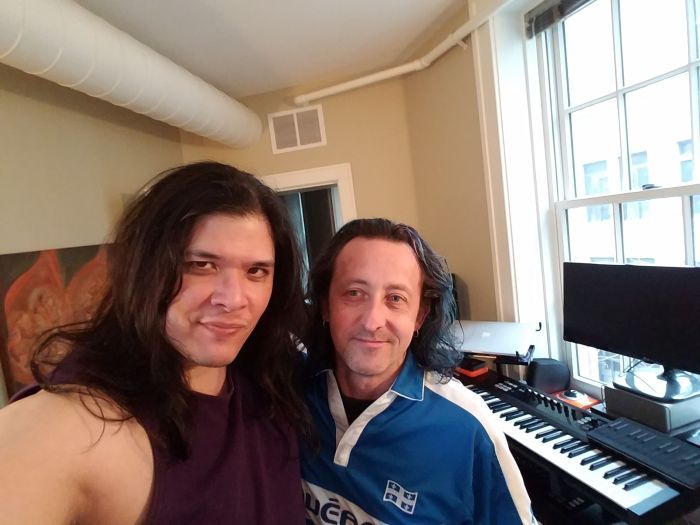 -I also was able to meet, albeit very briefly, with Gene Simmons of KISS when he was in Syracuse promoting his GENE SIMMONS MONEYBAG SODA. I was able to say thanks to him as well as get a pic with him. I also saw his solo band later that night-third or fourth role. It’s been a loooong time since I’ve been out to see a band. Perhaps that needs to change… 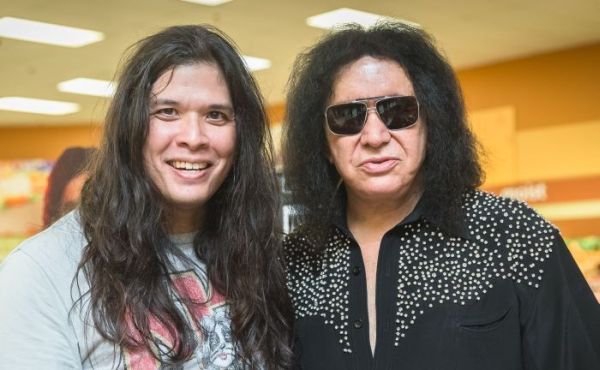 So for 2019, I’m looking to make even further steps out of the grave-and to even get out of the grave altogether-what a concept 🙂 I’m looking to sharpen my focus even more and get things done. As I mentioned last year, I’m still not a big believer in the whole “New Year, New Me” credo-mainly cause, technically, you can do that on any day. As Tony Robbins would say, change happens in an instant. It’s getting to the point of making the change that can take time. I am a big believer in just doing the best I can to do at least one thing at a time to make things better. Just do at least one thing. Take one step forward. I had no choice when I was deep in the grave. There was no “magic wand” that could teleport me out of there. I have to do it the hard way-one step at a time-and I’m going to keep doing that. I just hope I’m not too late. Whether I am or not, I won’t stop trying. So for me and Mini-Corn (who I started his tales on the WWJ INSTAGRAM PAGE, we wish you all a Happy New Year! If you’re going out tonight, please be careful and don’t drink & drive.