-Here’s a list of the various interviews (via print / audio / video (esp. those that won’t allow embedding) that WWJ has done-as well as links to the actual pages that host them. Click on the link next to the date to check them out.

– Video Interviews (that allow embedding) can all be seen HERE

10/24/2020-The Horror Of It All Interviews WWJ on Last Day Filming of “Tales of Dracula: Dracula Meets The Wolfman”

October 24, 2020 was the last day for filming on “Tales of Dracula: Dracula Meets The Wolfman” (AKA TALES OF DRACULA 2). While filming, Mark Dickinson from THE HORROR OF IT ALL dropped to interview various members of the cast & crew-including actor Wayne W. Johnson, who has played the role of Dracula in both films. While WWJ has done Interviews with Mark, this is the first time doing so in full Dracula mode.

TRIVIA – At the end of this interview is a slideshow of pics Mark took while on set as well as a mini-teaser for Tales 2.

Back on September 8, 2019, Director Ron Bonk and I (Wayne W Johnson) did an interview with the SACRIFICIAL TERROR PODCAST w/ Sam Iam Mason, Rheanon Nicole (Zombie Barbie) and Lance Wagner) pertaining to the horror/comedy film HOUSE SHARK. Lots of behind the scenes info about the film including talks about actors Trey Harrison, Michael Merchant & Wes Reid (Jonathan Straiton) and that Non-Native guy who played Darth Squanto 🙂

TRIVIA – In addition, films NIGHT OF SOMETHING STRANGE and JOHNNY Z were also touched upon plus how I broke the House Shark (!) as well as why makeup artists, as soon as they find out I’m involved in a film, double their rates (HA!) 😀

Here’s a video interview I did with Rick Smith for his show CHILLIN WITH THE RICK. Rick has been interviewing a lot of musicians in the CNY area and has wanted me on his show for quiet awhile-we even had a previous time to film but he got sick the day of.  It’s around an hour and fifteen minutes long and we hit on all kinds of topics including acting, business and music-including stories involving CAROLINE BLUE as well as some of my past bands like Front Row, Smokin’ Worm, Four Large Men and Tastes Like Chicken.

TRIVIA- In addition to some of the past bands, Rick also asked for some stories on some of the past musicians I’d worked with who had previously been on his show including Roy Coston / Roy St. James, Mike Merrifield and Darrell White (AKA DR Rhyder).

Here’s a replay, via Facebook Live / Google Hangouts, of the interview I did for The Horror Syndicate last night. It’s about 2 hours long and we go over a lot of stuff like Night of Something Strange, Johnny Z, Video Games, Bloody Tampons (as in, what was my “motivation” for doing that one scene in NoSS), CAROLINE BLUE, the first horror films I remember seeing, Bruce Lee, Arnold Schwarzenegger, House Shark, “Mohawk,” “Empire State of the Dead,” She Kills & Tales of Dracula–the last 3 movies I mentioned, I believe, one of the guys bought DVDs of via Amazon while we were talking so I did good yes?

🙂 I had a great time (except when I got disconnected momentarily) and they did stump me a few times so that was good.

🙂 Thanks again guys for having me on-hope we can do this again some time in the future.

TRIVIA-Thise guys were all fans of NoSS and, for whatever reason, things kept coming back to the scene in the film with the bloody tampon 🙂 Another thing mentioned in this was who was my favorite scream queen and, it being me, I had to name four 🙂

Last night I did a podcast interview with BRASSYS WORLD with Luca Brassy and Jill Camillo. Also on was Tred Hulse, who is on for the first 20-25 minutes. Some of the topics include CAROLINE BLUE, NIGHT OF SOMETHING STRANGE, ROMEO 3000, MS CANNIBAL HOLOCAUST, DOLLMAKER (as well as THE DOLLMAKER), MAD ANGEL FILMS, some hip hop music videos I was in (Juni McGregor & Devon Poke Magnus) , “Empire State of the Dead”, JOHNNY Z, RADIANT DARK, MOHAWK, HOUSE SHARK as well as my usual wordy self 🙂 Click HERE to listen to it.

TRIVIA-While discussing Mad Angel Films, I reveal one of their “secret negotiating methods” when multiple producers are in gridlock -siting an example when me and Matthew A. Peters had discussions over the script of “Romeo 3000” before filming 😀

Wayne W. Johnson is brought back onto VOLUME 3 CHAPTER 43 OF THE NECROCASTICON. Topics include MOHAWK, ROMEO 3000, NIGHT OF SOMETHING STRANGE, The Oscars, KISS, BUBBA HO-TEP, SHE KILLS, Kevin Smith as well as Wayne and Azriel Mordecai exchanging stories on working with actress Jennie Russo on Noss & She Kills 🙂 Click HERE to listen to it.

TRIVIA-This is about an hour and a half long and done via Skype. Topics do sometimes change on the fly so you’ve been warned 🙂 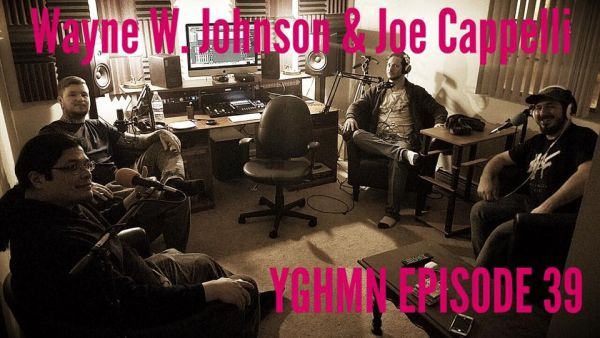 Wayne W. Johnson & Joe Cappelli are interviewed by the crew from YOU’RE GONNA HATE ME NOW Podcast less than a week before the premiere of ROMEO 3000. They talk about the film, acting and MAD ANGEL FILMS – with a little bit of NIGHT OF SOMETHING STRANGE for good measure 🙂 Click HERE to listen.

TRIVIA-This was Joe Cappelli’s very first interview, while Wayno has been doing them forever 🙂 This interview is a little over two hours long.

Wayne W. Johnson doing a written interview from Al Doshna-an actor who Wayne has worked with on the films #Slade Coolins:In & Out of Time,” ROMEO 3000 & HOUSE SHARK. This is a long read cause Wayno is such a windbag 🙂 The interview is on Al’s Google Plus page via the link in the title. However, for the sake of perservation, a copy of it can also been seen by clicking HERE.

TRIVIA-The interview on Al’s Google Plus page also has You Tube video links chosen by Al to put some visuals into the interview. Those links have been added to the version here as well.

Wayne W. Johnson interview by Nick Morman for THE WEBCAMNICK FANPAGE from Syracuse, NY at the premiere of the film “Transformation” (HEWITT FILMS).

Wayne W. Johnson interview (edited) by Bonsart Bokel for the RADIO RETROFUTURE podcast from The Netherlands. This podcast specializes in steampunk and a good chunk of the interview is about the upcoming film ROMEO 3000 (MAD ANGEL FILMS in association with WWJ PRODUCTIONS).

TRIVIA-As stated above, this is the edited version of the interview. Perhaps the unedited version will appear here at some later date 🙂

Michael Alan Fitzgerald (FIENDISH FILMS STUDIOS) interviews the one and only zombie panel at the Syracuse Zombie Con in Liverpool, NY on May 27, 2017. Included on the panel are Greta Volkova (TALES OF DRACULA), Mark J. Peek (“Half Dead”), Jeremy Ambler ( THE WALKING DEAD) and Wayne W. Johnson (NIGHT OF SOMETHING STRANGE).

TRIVIA- some of the answers to the questions were quite…interesting… 😀 Be sure to check out Jeremy’s talk and actions on what he learned at “Zombie School” in prep for “The Walking Dead.” \m/

Wayne W. Johnson audio interview with David Strege, Michelle Jaeger and Dane Keli for INSIDE MOVIES GALORE. Just a heads up, for a chunk of this, David’s voice is garbled and / or distorted for some reason.

TRIVIA-Multiple questions and answers in regards to WWJ’s filmography to where the entire interview is over three hours long (!)-and they didn’t even get to half of the projects WWJ has been in. Prepare yourselves for the long haul with this one… 🙂 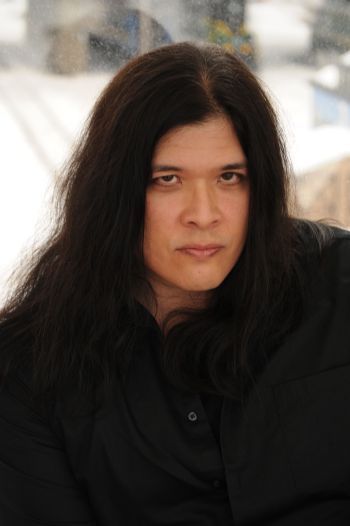 Wayne W. Johnson audio interview with THE HORRIBLE HORROR PODCAST. This interview centered on NIGHT OF SOMETHING STRANGE, but did hit into other films and music from Wayne’s past. Click HERE to listen to the interview (around an hour long). This interview is also available via iTUNES. Wayne W. Johnson audio interview by the members of the G33KPOD Podcast which includes (L. to R. ) Paul Showens, Andrew Montclair and Hugh Allen at the 2017 Zombie Con at the Holiday Inn-Liverpool, NY on 5/27/2017.

TRIVIA-Initially, the name “Andrew W. Johnson” was used for labeling this by mistake and still might be in use at some places (such as the URL). This podcast is also available via iTunes. Click HERE to listen (interview is around 30 minutes).

Wayne W. Johnson audio interview by Jay Kay for THE HORROR HAPPENS SHOW-Included in this is also an interview with NIGHT OF SOMETHING STRANGE Director Jonathan Straiton, as well as reports from the MONSTER MANIA CONVENTION in New Jersey (where the interviews for WWJ & Jonathan were done) and many more. Jonathan’s interview starts at around the 2:53:10 mark, while WWJ starts at the 3:14:00 mark.

TRIVIA-This occurred at the 2016 Monster-Mania Convention in Cherry Hill, NJ. I’d just arrived when Jonathan was being interviewed and was invited to be as well. It was pleasantly unexpected and, as the promos say, uncensored 🙂

-TRIVIA-This interview was originally set up to be a co-interview with Matthew A. Peters of MAD ANGEL FILMS, but he couldn’t make it so I went solo 🙂 TRIVIA-In their Volume 2 Chapter 8 episode, it’s main subject is KISS and I get brought up during the broadcast. This led me to being interviewed on Chapter 10 🙂 Wayne W. Johnson written interview by Matt Peters for MAD ANGEL FILMS. Included on that page is a video compilation of WWJ’s roles in almost all the films he’s done for Mad Angel Films to date (some still unreleased).

-Wayne W. Johnson video interview by Marquis DeBlood for THE HORROR OF IT ALL (Interview with WWJ starts at 4:16 mark)

-TRIVIA-This interview is part of a set of interviews done by Mark Dickinson with various cast and crew members of the film “Tales of Dracula” at the cast & crew premiere. The segment with me was taken right after we had all finished watching the movie. Wayne W. Johnson audio interview by Alonnie Milligan for WATERS EDGE MARKETPLACE  just before the premiere of TALES OF DRACULA in Binghamton, NY.

Unfortunately, the MonsterDiggare.Net site is down and there is no way of knowing when it will be back up-if ever. Fortunately, the contents of the interview can be seen HERE

-Wayne W. Johnson being interviewed by WOLFBAIN PRODUCTIONS about his role as Dracula in TALES OF DRACULA .

TRIVIA-This was originally filmed during my last day of filming with “Tales of Dracula” on 7/27/2014.The actually interview was around 20-30 minutes, mainly due to me being a “tad” long-winded 🙂 Whether the entire interview will ever see the light of day is unknown. TRIVIA-This happened the day (11/8/2012) after I came back from filming an episode (“Kitumba”) with STAR TREK NEW VOYAGES. I’d actually filmed all this with my camcorder as an archive for myself, but then the link went dead and I couldn’t find it so here they are. Occasionally, because I’m filming a computer monitor, you can see a “ghost” image of me flash on and off 🙂

-TRIVIA-This was done the same day I’d finished filming for “Half Dead.” I was beat and was still hurting from an injury during a fight scene earlier that day. For no particular reason I decided to not only stay dressed up as “Vox” but also to stay in character. All the replies are 100% improv-just reacting to Melissa’s questions… 🙂