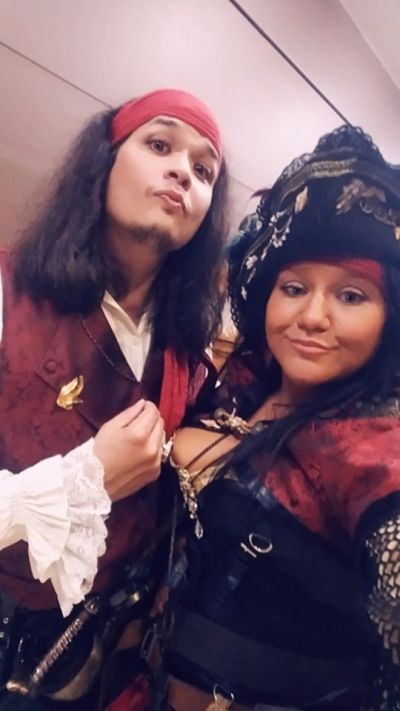 -9/13-14/2019 – Months earlier I was once again asked by THE PIRATE QUEEN QUIGLY (Lynzie Quinn) to accompany her during Pirate Weekend at Exit 33 in Turning Stone Casio; reprising my role as “Johnny Red.” Initially, due to scheduling on my part, I didn’t know if I could do it this year but I was glad to see that things cleared out for those days and I was able to make it. It’s always an interesting acting gig cause it almost entirely relies on improvisation. While I have a few stock replies, one is almost reliant on what someone says to you depending on what they say is how you reply. So basically, you have to come up with the reply on the fly. Obviously, there’s a good chance of crashing and burning, but it’s like any skill or muscle per se – the more you use it, the better you get. Yes, there’s exceptions-hence why I said “per se” but I digress…

-The first night was a little slow in regards to turn out and time passing. I had enough trouble with the chest holster for my blunderbuss (on loan by the Queen) so this year I just stuck it down the front of my pants. That did open up an opportunity for me to talk about my “wood” when people tried to grab it 🙂 For those who don’t know, “Johnny Red”-as per the color in his name- is a tad on the “flaming” side so to speak. 😀 It makes for an interesting performance. I did get my butt grabbed a number of times this first night-and here I forgot to bring my butt pads 🙂 The crew was a little short-handed tonight-only four of us this first night (The Queen, Little Jack/Stilty (Craig Loomis), Captain Barbossa (Jim Hanselman). There was also some trouble. One guy decided he could get a little handy with The Queen’s Front and, since he wouldn’t let go-she bit him 😀 This caused him to become delirious in lust and, not too long afterward, was seen being “escorted” towards the back by security personnel. There was also a guy who was yelling at someone outside The Tin Rooster (AKA “The Big Cock” in Johnny Red’s world 😀 ). and was eventually told by security to go home. He would about ten feet back, turn around and just wait. This happened two more times. Not sure what happened to him by night’s end…

-I did have one guy not too happy with me, I guess. A lady wanted me to pose with this guy (her boyfriend?) next to the skull display and he kind of freaked out, power walking away from me while saying stuff like” No F*ckin’ way am I getting a pic with him!” and stuff-even while she kept laughing and insisting that he stay for the pic. I guess I shouldn’t have asked him if he wanted to hold onto my wood for the pic 😀

-The next night-man did time fly by. The place was packed! Not only was there more pirates (CAPTAIN JACK FOR HIRE CNY (Rick Martinez) here, but also a number of people who came dressed in pirate gear). In addition, there were two lovely pirate lasses who were handing out beads by the boxload as well as three lovely showgirls who were all from the tri-state area. The line to The Tin Rooster was quite long. Nothing bad/dramatic happened, but wow did time go by fast. I had some lovely encounters with various people-including this wonderful couple who had met in Germany (I believe) and told me she was Mormon-which lead to an interesting discussion on how Mormons are portrayed on Porn Hub (not that I would know from personal experience of course) 🙂

-I had a great time but man did the time fly by…Thanks to The Queen for having me involved and hopefully I’ll be invited to future events (with advanced notice of course-it takes me a while to even grow what facial hair I actually had those nights…).

Hiya-this is WWJ & thanks for dropping by to my site! I hope you enjoy your visit to my home away from home online. If you have any questions, comments and /or concerns about this site, please let me know via the CONTACT page. Thanks & best wishes to you & yours!
View all posts by Wayne W. Johnson →
This entry was posted in ACTING, THEATER and tagged 2019, acting, Barbossa, Captain Jack, Captain Jack For Hire CNY, cny, cosplay, Craig Loomis, Exit 33, Jim Hanselman, Johnny Red, NY, Pirate Queen Quigly, pirates, Pirates of the Carribean, Pirates Weekend, Turning Stone Casino, vernon, wayne w johnson, WWJ. Bookmark the permalink.