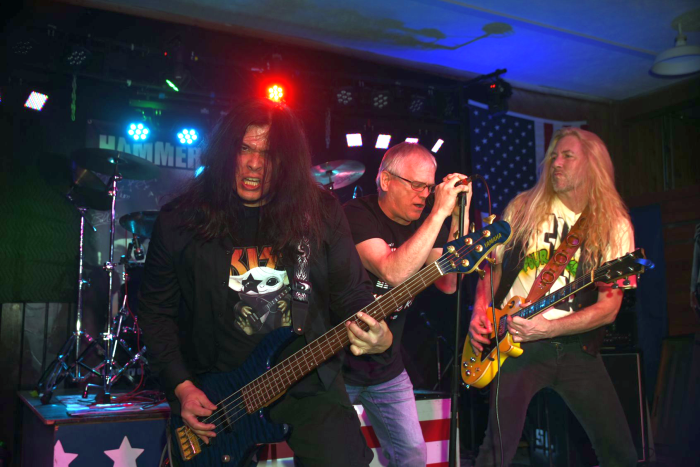 -Yes, I finally made the time to get the clips from the 2/29/2020 Hammerfest show up on YouTube. On 2/29/2020 I was in one of the bands that played at Hammerfest 2020 – a Tribute to Jerry Yerman, former singer of Four Large Men, who passed away in 2019. This was also to honor those from the Mark I version of FLM who have also unfortunately passed – Rick Richmond & Kevin Meacham.

-Initially I posted them on Facebook but there was a few problems-most notably that they weren’t coming out in 1080p resolution (as they were filmed-that’s why I bought that camcorder in the first place). I also had to do some basic editing cause, being a camcorder, once it hits a certain time mark it creates a new file-even in the middle of filming. In this case, it did it while I was singing “Parasite” (KISS). The second time I attempted it was even better so there’s that…Here are the clips with a little bit of backstory added to the descriptions. All videos here done by WWJ PRODUCTIONS. There are also arranged, from top to bottom, in the order they were performed that night so… One all these clips are the remaining members of the band Four Large Men (Mark II) which include Roy Coston (LOVEBONE), Mike Merrifield (ONE HARD KRANK) & myself (Wayne W. Johnson – CAROLINE BLUE) with special guest musicians filling in on all the songs.

-This song was done by FLM back in the day but is our own arrangement of “Good Morning Little Schoolgirl” by Ten Years After. When this song was added to the list I went on YouTube to listen to the original version to re-learn it-and was over 11 minutes long (!). I was thinking, “I don’t remember playing this song for that long.” Turns out that not only did we re-arrange the song to a more standard length, but that we also recorded a cover version of that song while in the studio in the 90s-and I had no recollection of ever doing this. 🙂 I’ve kept journals for decades, which helps to augment my memory, but I was genuinely surprised, yet pleased, that this existed courtesy of Mike M. I know Lynn was a little nervous before we started the show but he did great.

-This song was done by FLM back in the day and was pretty much the mainstay of any show we did. We only had one rehearsal overall with the guest singers and Mike S. wasn’t able to make it but he belted it out at the show. We had originally planned for Mike S. to also do “Heaven & Hell” (Black Sabbath) but that was dropped the day before the show. I didn’t realize (for some reason cause I’m sure Roy told me earlier) that Mike was singing the entire set for Visigoth as well that night. Some songs were suggested to replace it-including FLM’s “Slave to the Hourglass”-which I recorded for CAROLINE BLUE (which can be seen HERE *shameless promo mode ended* 😀 ) but the bass line and vocal line are conflicting (I play guitar when singing this normally) and would take some work to re-structure so maybe next time…) but in the end we just stayed with what we had-which was for the best.

-On this song, however, we had a guest drummer Steven R. Seelman and no singer. While FLM (Mark II) never played “Stranglehold,” Roy’s current band LoveBone does and as a bonus- halfway thru-Roy gets the crowd to shout out the names of Jerry, Rich & Kevin several times. An added bonus is Monster Mike singing on the third verse for this. This is a longer clip so you have been warned…This song was a staple in LoveBone’s set list and Roy had plans to do a crowd participation part in this, but I didn’t find out that this song was a go till a few hours before we went on (!). It was one of the songs suggested to replace “Heaven & Hell” but I didn’t receive an answer if we were doing it so (silence / no reply usually translates to “no” – Wise Wisdom Wayno-try to say that 5 times fast-HA!) so I was a little surprised when I got the news we were doing it. “Just play A” I was told. There’s more to the song than that-there’s even a short bass solo per se. This, however, wasn’t my first time being in this position for a show (and I’m sure it won’t be the last) so I just went to my car and listened to the song a few times. It IS mostly just A, but I got the feel for it and the basic arrangement like a normal cover band would do and I think I made do 🙂 . Then, on the last verse, Mike M. started singing so not bad overall for a song that was basically played last minute 🙂

-On this song, we had a guest backing vocalist (Chuck Heath) with me (WWJ) on lead vocals. FLM performed this song back in the day and since I’m kind of and / or was known as “That KISS Dude” in the CNY hard rock / metal circles, I picked this one 🙂 You’ll notice at the beginning of this video I take a moment to mention that Jerry’s Guitar, Hat, Mic Stand and a drink was at center stage. A little throwback to CAROLINE BLUE stage raps as well-although Roy has now replaced me as the “rock & roll preacher” onstage \m/ When I put this up initially on Facebook, it cut off in the middle of Roy’s solo. I fixed the problem (it was my fault) and re-posted it there so all’s better now 🙂 BTW- when I made that remark about the “guest singer” taking his time to get to the stage, it was a rag on myself not Chuckie cause if you put a mic in front of me on a stage, I can be a mouthful (HA!) 🙂

-“Sweet Jezebel” was an FLM song and one of the most popular ones-as well as being the hardest to sing. Even Jerry had trouble singing it at times and if he had trouble with it, you can imagine how hard it would be for anyone else… At the last tribute show we had Mary Meacham (DC Strut / Ardent) singing it and this time it was Chuck. I presume this song will always be in the set list when doing these shows (I believe there are plans to make Hammerfest a yearly event) so a number of singers will be doing this. Maybe even I’ll get a shot at it 😉