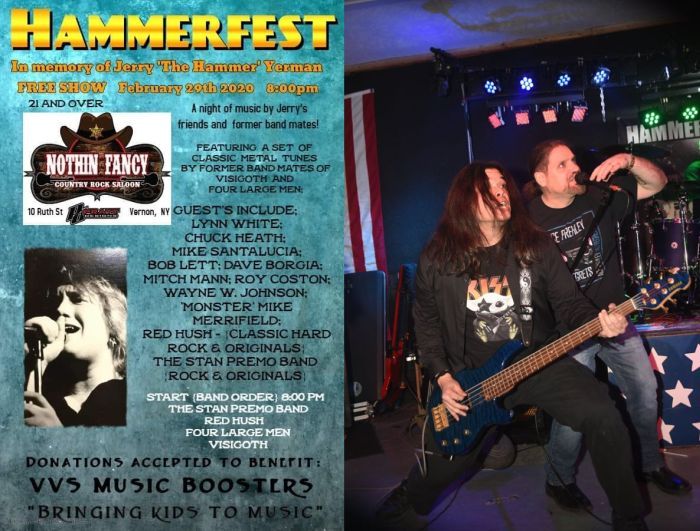 -Back in July 2019, I performed at a tribute show for the late Jerry Yerman (as well as other members of the Mark I version of the band Four Large Men (Rick Richmond and Kevin Meacham) at the Oneida American Legion. I was in the Mark II version of the band from 1993-1999 along with Jerry, Roy Coston and Mike Merrifield. We did some songs at that event (along with singer Mary Meacham and a guest appearance by Scott Rif Miller) and it went over well. A few months ago I was contacted in regards to a similar tribute show which may become a yearly event to be called HAMMERFEST at the end of February 2020. This would have three other bands involved (Visigoth, Red Hush and The Stan Premo Band) and me, Mike and Roy would perform under Four Large Men with Guest vocalists Lynn White (Before August), Chuck Heath (LoveBone) and Mike Santalucia (The Bomb). I would also be singing on a song-which would be “Parasite” by KISS-a song that FLM used to perform back in the day. Mike would be singing “Snortin’ Whisky” (Pat Travers” and “Heaven & Hell” (Black Sabbath), Lynn Would sing on “Good Morning Little Schoolgirl” (Ten Years After) and Chuck would be singing on FLM’s own “Sweet Jezebel.”

-Rehearsals took place during January and February, although I was only able to be at one of them, but I was ready for it. I did get to watch Visigoth play which was fun. The show was to take place at Nothin’ Fancy in Vernon, NY. I hadn’t played there since doing a Tribute to KISS set with CAROLINE BLUE for a benefit show for Roy back in 2005. There were a lot of changes-specifically the stage was out of the corner and a whole upstairs deck had been added. Very nice stage to play on. I was pleasantly surprised at the amount of people who were here that I knew-it was like I’d never stopped playing to go into acting. I was looking forward to performing onstage (as well as debuting my KISS / Baby Yoda shirt) 🙂

-Less than 24 hours I was told we weren’t doing “Heaven & Hell” so me, Roy and Mike were brainstorming online for awhile. One of the songs that Roy threw out was an instrumental version of “Stranglehold” (Ted Nugent). I didn’t really hear back whether we were actually doing it or not so I didn’t work on it. So imagine my surprise when Roy comes up to me at the show saying it’s on the list 🙂 “Just ride the A string.” Um..it’s a little more than that-there’s actually a quick bass solo in it. Regardless, I went to my vehicle and listened to it a few times and got the basic gist of it sans solo. It IS mostly in A but there’s a few other things and I got them quick. It’s not my first time being in a situation like this 🙂 Of course, now I have to learn it so it can be in my repertoire for possible future use….

-As I mentioned previously, there were a lot of people I knew here-many who I haven’t seen in years. It’s always great to catch up with people and see how they’re doing. Andy “Doc” Gore (ex-CAROLINE BLUE bassist) was also here so that was also a nice surprise. It would be fun to bring CAROLINE BLUE here. You never know…

-All the bands did great this night. Our set was short and was over before I knew it. For myself, in many ways, it was like old home week per se. One new thing that came up was the “Sarco (Sarcoidosis) Factor”-which I didn’t anticipate. By the end of the second song, I was sucking wind really bad. Yes-I’m older and currently out of shape-but this is a factor that has been cropping up the last few months so I knew that it was due to this. I have to be careful cause not only am I no longer a spring chicken but I definitely have to make adjustments for this new, and unfortunately permanent, factor that is now part of my life. Saying all that, “Parasite” was to be the third song but Roy wanted “Stranglehold” to be next and I readily agreed. I mean, if you have no wind, how do you sing right? Getting older sucks, but getting older with Sarco…adapt and keep moving forward…

-Roy had a large audience participation thing going on during “Strangelhold.” It’s always fun to see the front man he’s become-cause he used to be so quiet back in the day. Monster Mike even came out to sing the last verse on this one-video coming soon on this and all the other songs performed. The one that I didn’t get video for (because I didn’t know it was happening) was during Visigoth’s performance of “Cold Gin” (KISS)-they had me, Chuck and Kyle Giglio (Remedy) come up to alternate on verses. There is a pic of it but other than that, as far as I know, nothing else.

-One other thing to note…In front of the stage Jerry’s brother Freddie had brought Jerry’s guitar, mic stand and hat and put them in front of the stage. before I sang on “Parasite” I pointed this out just in case people didn’t know what it was and saying that at least he was here with us in spirit-although we all wished he was still here in person…

-Overall, it was a fun night and a good turn out. As I said before, I think Hammerfest will be a yearly event and, if so, I’ll see everyone at the next one. Thanks to all who came out and / or showed support for this.

WRITE-UP IN THE UTICA OBSERVER-DISPATCH by MARK SISTI