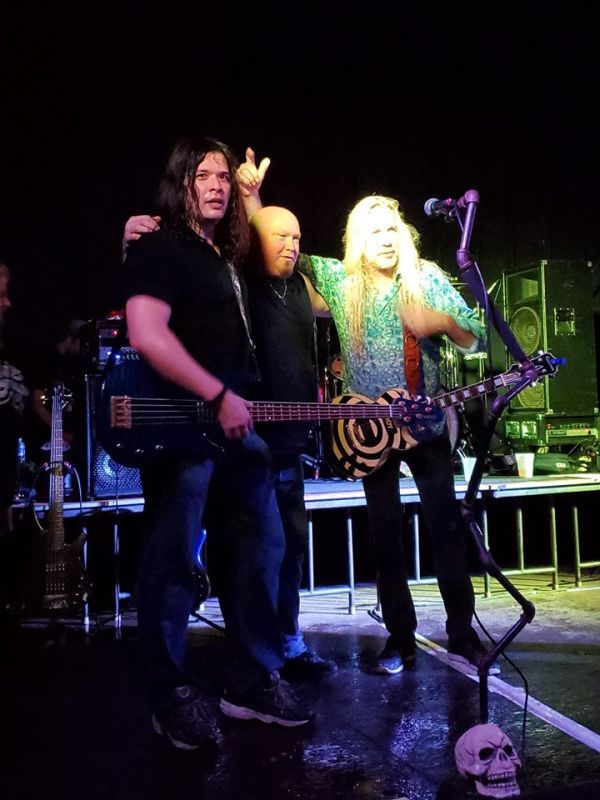 -Above is an awesome pic, taken by Freddie Yerman, right after last night’s performance during a tribute show to the original members of the band Four Large Men who have passed away including Richard K Richmond, Kevin Meacham and, earlier this year, Jerry Yerman. Pictured here L. to R. are me (Wayne W Johnson), Mike Merrifield and Roy Coston. The 3 of us, along with Jerry were the second coming of Four Large Men from 1993-1999. Along with vocalist Mary Meacham. (Ardent, DC Strut), the four of us played three songs during a set which included the covers “Heaven & Hell” (Black Sabbath), “The Green Manalishi” (Judas Priest) and FLM’s own “Sweet Jezebel). I have to note that we didn’t rehearse as a band for this so we were a tad loose but things went great and we were well received. I’ll have pics and hopefully video up soon (I know Roy will as well plus others). The three of us haven’t played on the same stage together all at once since 1999 and, while playing, it didn’t seem like 1999 was 20 years ago. Time just keeps marching on…

Pics can be seen on my new Facebook Musician Fan Page via the link below.