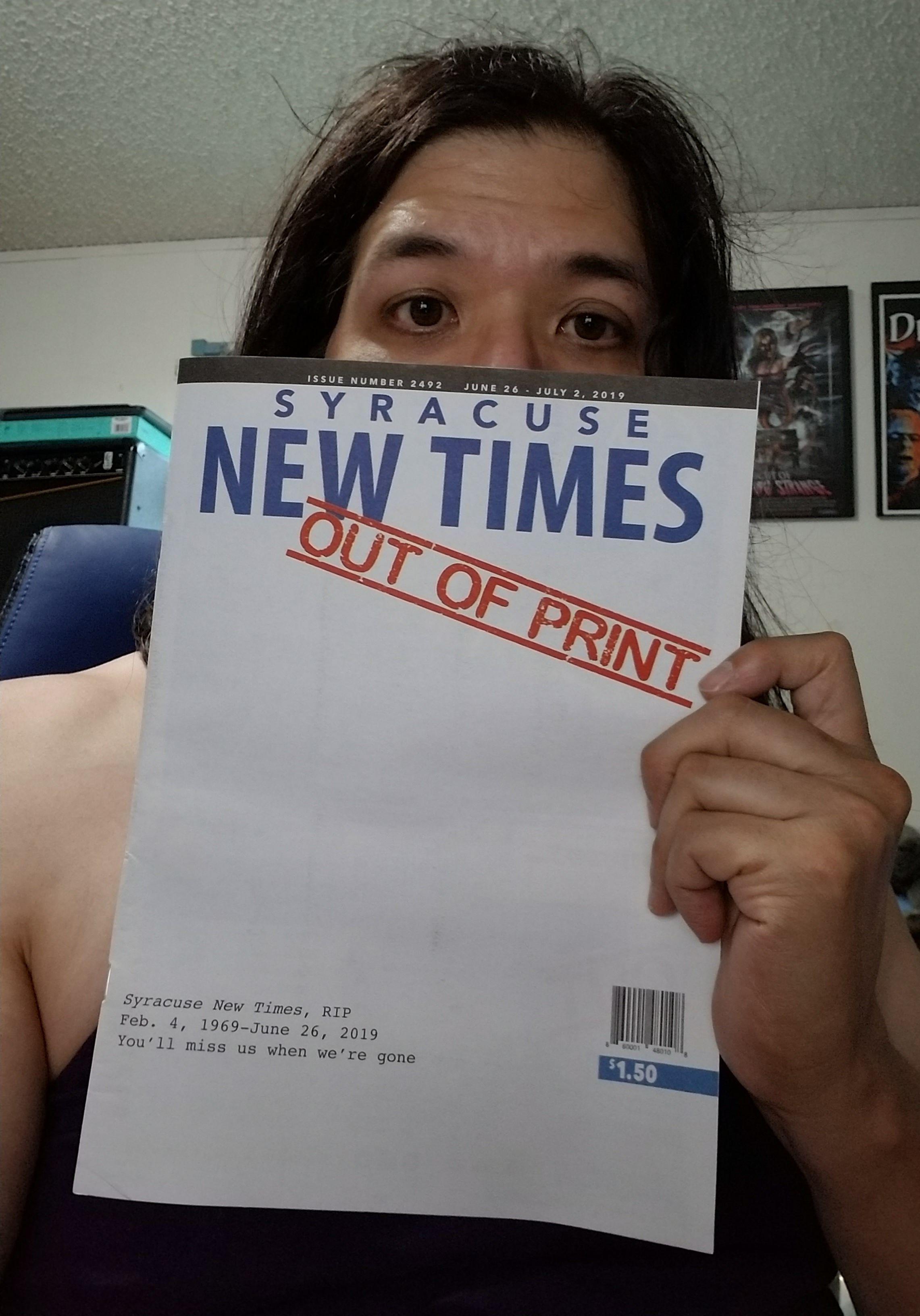 -On June 26, 2019 THE SYRACUSE NEW TIMES published its last paper before heading off into the sunset. Back in the day when I was starting out in music, it was THE place to go to when looking to find out information about where the popular bands were playing in town. A good chunk of that was at THE LOST HORIZON where, back, then, it was the place to play for national acts that weren’t booked in arenas. (ex-include Yngwie Malmsteen, Lita Ford, Cinderella, Type O Negative and so much more-even Guns N Roses before they exploded into superstardom). It was also the place to find other musicians to form bands with-and there were even a lot of articles about local bands and the local music scene as well.

-As time went on, all of those started to decrease to where most of the stuff could be found online. And while Jessica Novak and a few others still did write-ups on local bands, it was more and more shifting to national bands. Remember back in the day when The SNT would actually have reviews of local releases? Of course, in this day and age, newspapers as a whole are taking a hit as more and more of what they do can be found online…and while the New Times was, until this year, a free publication, more people still went online to get their information-mainly (I believe) cause you didn’t have to wait a week to get the info as well as other reasons.

-Earlier this year The New Times decided to not only reformat into a more magazine-like format but also began charging $1.50 per issue. While I don’t claim to know all the reasons for this change, I would say that I believe part of that was just due to not being able to keep up the costs of making a free publication per week. However, it wasn’t too long after this change was done that it was announced that the New Times would cease publication. I’m not sure if it will continue online or just totally cease to exist.

-One interesting tidbit. Back in June of 2011, there was a call by the New Times for bands to come in and have a free photo shoot taken so that they would have pics on file for possible future publication. Of course, I went there to represent my band CAROLINE BLUE The photos were taken by Michael G. Davis and, I believe this is when I first met Jess Novak and even got some pics with her. I did the shoot and remember a lot of “Jazz Hands” poses being involved. 🙂 Not too long after that I asked about getting copies. No reply. I just recently messaged Michael again about them with the news of the New Times going under. No reply. Oh well. Maybe they will surface up at some point…

Hiya-this is WWJ & thanks for dropping by to my site! I hope you enjoy your visit to my home away from home online. If you have any questions, comments and /or concerns about this site, please let me know via the CONTACT page. Thanks & best wishes to you & yours!
View all posts by Wayne W. Johnson →
This entry was posted in R.I.P. and tagged Cinderella, cny, Guns N Roses, Jessica Novak, Lita Ford, Michael G. Davis, Newspaper, NY, publication, R.I.P., SNT, Syracuse, The Lost Horizon, The Syracuse New Times, Type O Negative, wayne w johnson, WWJ, Yngwie Malmsteen. Bookmark the permalink.