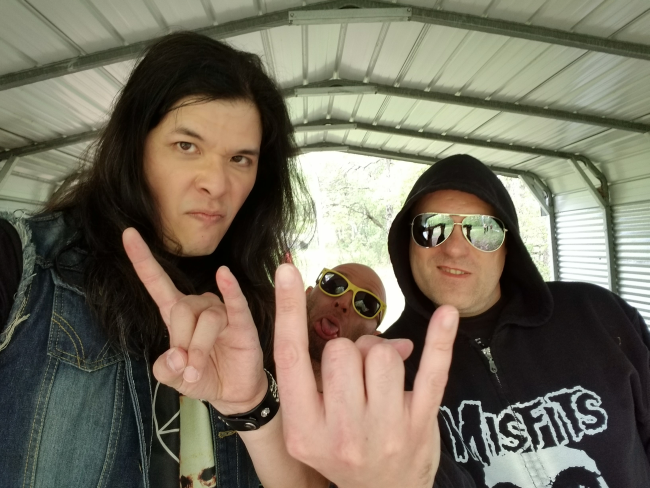 5/25-26/2019 – My last two days filming on “Babysitter Massacre: Heavy Metal.” I rented a car for this and made my way out to East Nassau, NY in the wee hours of Saturday morning. Overall-on all days-filming went by pretty fast. There were a couple of major scenes where it took longer, but everything went great. I got to meet the rest of the cast and everyone involved in this has been wonderful to work with. As you can see from the pics there were three different masks I had to wear. The black one had a habit of tickling my nose. It actually had to be cut off me at one point. They all fit my watermelon/horse head well though 🙂 I was able to not only do some interesting vocal tone changes in this one but was able to add some “spice” to my dialogue as well as things happening in several scenes. Me and actress Jennifer Lefsyk actually teamed up a few times while doing this. I also have to admit I that I did “borrow” a little from some past roles I’ve done for this one 🙂 I spent the night in the changing room-which had been overflowing earlier with women’s clothing- and things were just going pretty quick. I didn’t sleep much all the nights before I had to film-but a little more before the last night. I have to admit to being surprised at the choice of the apron I was told to wear -thanks Dan 🙂 ………. -For me, Saturday was several small scenes and one large action/dialogue scene. I even got to do a little duet singing with Jennifer 🙂 Sunday was similar except it was one larger dialogue scene, one medium dialogue scene, and several smaller ones. In contrast, I believe I was in about 18 smaller ones for my first day alone. The last day is always bittersweet cause things are wrapping but so is all the fun and just fast as it started, it’s over. It was great working with everyone involved in cast & crew on this. Thank to Meigg Marie, Mary Adams, Carolyn Shields, Brynn Alyson, Alonnie Ailligan, Courtney Brown, Sarah Randall, Jaime Jung, Jeff Kirkendall, Kevin Miner, JB Sapienza, Rachael Redolfi, Demon Boy, Vic Sage and David Weaver for the great work as well as for putting up with me 🙂 Extra thanks to Jennifer Lefsyk for not only being a joy to work of off, but for being my partner in “spice” as well not to mention putting up with the verbal assault I was unleashing on her during filming (check out the film for some extra “spicy” points) 🙂 And, of course, huge thanks to Dan and Henrique for casting me in this role and believing I could deliver – as well as not having me wear pink this time (which was my idea but hey…) 🙂 Hopefully, we (all cast/crew) will work together on future projects. I’m looking forward to seeing this come out and the reactions 🙂

-Pics can be seen on my Acting Page on Facebook via the link below.