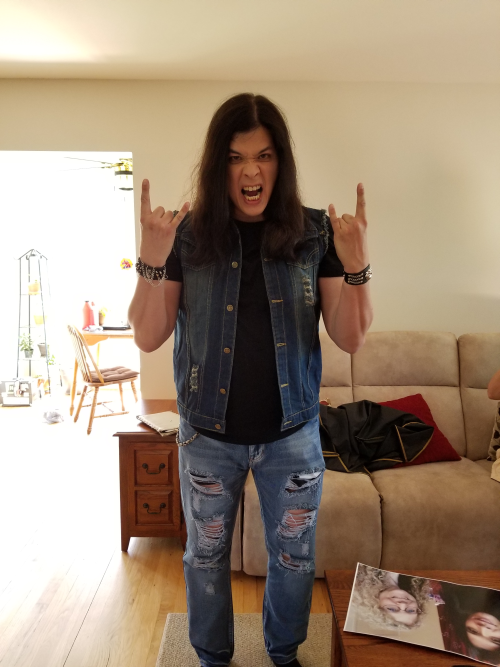 -On April 1 (April Fool’s Day), 2019 I was contacted by director/writer Dan Wilder (who I had worked with last year on the short film MERCURY SCREAMS) in regards to having a role in a new feature film he was involved in called ‘Babysitter Massacre: Heavy Metal (BSMHM).” It’s actually part of a horror franchise created by producer Henrique Couto, where he already made the first film and just recently had a successful Kickstarter Campaign to make three more. Click HERE to check it out. Dan sent me the script and I immediately presumed that he wanted me to play the role of the heavy-a rock musician named Viper. Imagine my surprise when Dan told me that not only had that role been cast, but both he and Henrique wanted me to play the main lead role of Billy Draggs. I said I’d think about it (HA!). Of course, I said yes (after intense negotiations…I got my 2 slices of pizza minimum per day in there 😀 ). The rest of the cast was filled up in the coming weeks. As some might know, I always like to add a little “spice” to my dialogue when I’m allowed to. Not only was Dan cool with that, but I was also even able to put in suggestions for things happening in a number of scenes. Not just for my benefit either. If the production team and film win, then all the cast and crew win so I always give as much input as I’m allowed to. The rest of the cast filled up soon after. I was happy to be working again with Jennifer Lefsyk again (we worked together on “ROMEO 3000” years ago and she was just awesome) and was looking forward to filming with her and the rest of the cast and crew.

-A week before filming was to start, the guy playing Viper had to drop out. The idea of me playing both Billy and Viper was thrown around and was put in the “last option” file, but we didn’t have to worry cause two actors filled the role. Looking at the shooting schedule-it looked quite ambitious IMO. My first day would be my busiest day in terms of the number of scenes I’d have to be filming. While “Romeo 3000” was the film where I had the most dialogue (currently), this one looks to currently being the one where I’m in the most scenes as well as a lot of dialogue. In BSMHV I’m in 36 of the 56 scenes-18 of which were shot on Day One. I have to admit I didn’t expect to be filming scenes that fast, but I trust Henrique and Dan cause I know they’re going to do the best they can for this. Not to mention maybe I actually starting to get better (Nah… 🙂 ). I had a great time. It was great meeting new and older cast/crew who were involved in this and they were all great. I haven’t been on set for the last two days (but I heard they were all knocking it out of the park) but I will be there for the next two-and time for me to jack up the intensity! \m/

-Pics from the first day of filming on “Babysitter Massacre: Heavy Metal” can be seen on my acting page on Facebook via the link below.

Hiya-this is Wayne W. Johnson (WWJ) & thanks for dropping by to my site! I hope you enjoy your visit to my home away from home online. If you have any questions, comments and /or concerns about this site, please let me know via the CONTACT page. Thanks & best wishes to you & yours!
View all posts by Wayne W. Johnson →
This entry was posted in ACTING, FILMS and tagged 2019, acting, Babysitter Massacre: Heavy Metal, Billy Draggs, Dan Wilder, demonic possession, devil Satan, Hard Rock, heavy metal, Henrique Couto, horror, horror film, horror movie, Jennifer Lefsyk, kickstarter, Mercury Screams, metal, possession, Romeo 3000, Viper, wayne w johnson, WWJ. Bookmark the permalink.