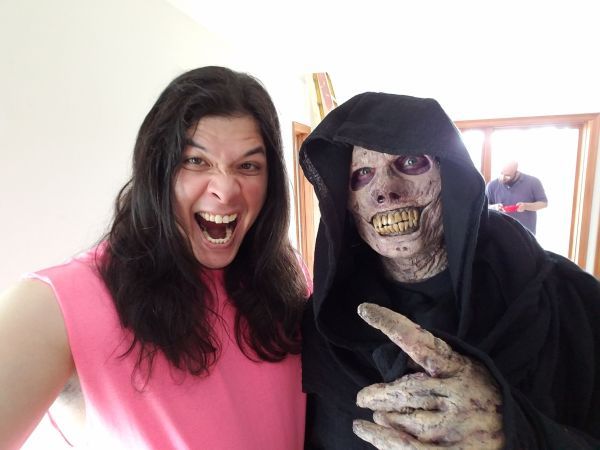 -Towards the end of March I got a message from director Dan Wilder asking if I’d be interesting in playing the role of “Herd” (love that name-I bet I can guess what one of his nicknames in high school was-HA!) 🙂 -the male lead-in his short film “Mercury Screams.” It would be filmed out in Nassau, NY for a day. It’s set up like a found footage type horror movie and the story takes place in the early 1980’s. This would give me a chance to dress up totally tubular 🙂 I got on board and started shaping up a look. I asked Dan about a few things, got approvals on some ideas and went to work.

-Since I’m continuing my research on how to currently live life as a broke actor, 🙂 I had my friend Sarah Randall take a pair of cheap jeans and acid-wash them. She did a nice job-even said she wanted them 🙂 I debated on getting one of those Casio watches, but that went against the broke actor study so that was off. As you can see from the pics, I’m not only wearing the acid washed jeans (pegged even-my first time ever doing that), but also a pink t-shirt. I wanted to get one as a tank top but couldn’t get one in time so…I was actually told by one of the crew that I looked ridiculous-but that just meant I did my job. If I could’ve gotten my hair permed, I would have. As is, I was able to wear it down as well as using my normal voice. I’m having a hard time remembering when I was able to do that last for acting. While I slightly debated about throwing some 80’s slang in (Dan basically told me to modify the dialogue however I liked-which is always awesome to hear), if I had short hair , 80’s style, I might of tried it.

-Nassau is a decent distance away from Syracuse. The call time was noon and, for me, it’s been awhile since my last acting gig so I was a little rusty on things. One thing that hit right away was that old concept of “hurry up and wait”-which lasted most of the afternoon. That’s fine BTW-no where near the record and I was having fun just being there. I got to meet the cast and crew-most of who were brand new to me and some even coming as far away as Boston, MA.

-Overall I had fun -outside of one thing with my right contact-which was bothering me starting around mid afternoon. The trip home was painful, but no worries-it’s not like I haven’t gone thru that before and it was part of the rust that I mentioned before. Dan and his cast / crew were a pleasure to work with and I hope I kept up with them. I look forward to working with them all on future projects. Thank you for having me Dan and thanks to all cast / crew for putting up with my crap 🙂

Hiya-this is WWJ & thanks for dropping by to my site! I hope you enjoy your visit to my home away from home online. If you have any questions, comments and /or concerns about this site, please let me know via the CONTACT page. Thanks & best wishes to you & yours!
View all posts by Wayne W. Johnson →
This entry was posted in ACTING, FILMS and tagged 1980's, acid washed jeans, acting, Dan Wilder, Early 1980's, Found Footage, Herd, horror, horror film, horror movie, Mercury Screams, Nassau, NY, pink shirt, Sarah Randall, wayne w johnson, WWJ. Bookmark the permalink.