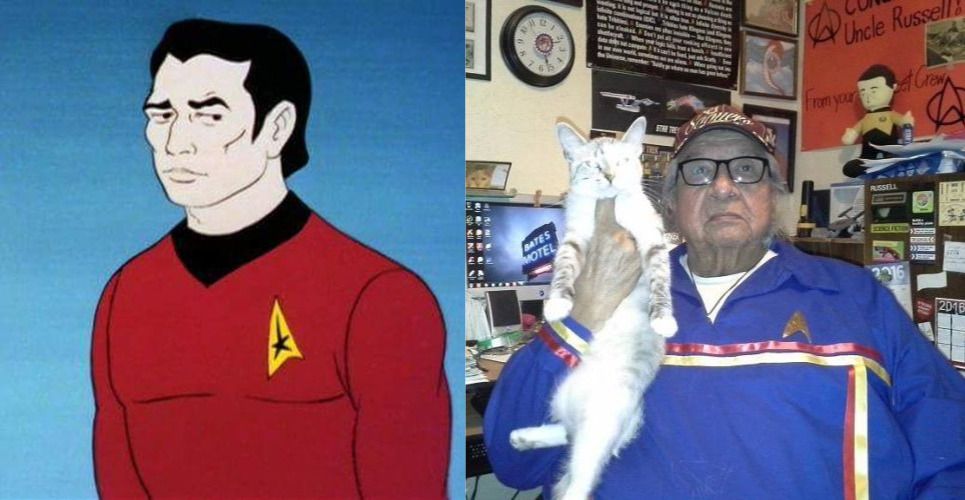 -I just found out about the passing of writer Russell Bates-which happened a few days ago. Russell was the creator of Ensign Dawson Walking Bear, a character from the STAR TREK THE ANIMATED SERIES episode “How Sharper Than A Serpent’s Tooth. ” Not only was he a co-writer of the episode, along with David Wise, but this episode was responsible for winning an Emmy Award ( the 1974-1975 Daytime Emmy in the area of “Outstanding Entertainment Children’s Series”). He was a Native American who’s lineage was from the Kiowa tribe.

-I had the privilege of being introduced to Russell via a group Facebook chat set up by Troy Beriner in January 2017. Troy had wanted to introduce us-being that I was the actor who portrayed Walking Bear in two episodes from STAR TREK NEW VOYAGES (“Mind Sifter” and “The Holiest Thing”-as well as one currently unreleased “Bread & Savagery”) in addition to, at the time, an upcoming episode with THE FEDERATION FILES called “Walking Bear, Running Wolf.” It was quite a thrill and Russell offered to give me some more background on the character, which I readily accepted. He also thanked me for bringing Walking Bear to life in those episodes-which I deeply appreciated. I sent him links to the episodes, as well as to “Walking Bear, Running Wolf” when it it was released online.

-Unfortunately, I never got to meet him in person. He was a cat person like me so I’m sure that topic would’ve opened up a lot of stories. 🙂 Below is a link to a brief write up on Russell showcasing the TAS episode and Walking Bear. It was touching to see that a couple of pics of me as Walking Bear were included in this as well.

-Russell passed away on April 9 after a brief illness. He was 76 years old. Graveside services for Russell will be at 2 p.m. Wednesday, April 18th at the Ft. Sill National Cemetery Pavilion near Elgin, Oklahoma.

Hiya-this is WWJ & thanks for dropping by to my site! I hope you enjoy your visit to my home away from home online. If you have any questions, comments and /or concerns about this site, please let me know via the CONTACT page. Thanks & best wishes to you & yours!
View all posts by Wayne W. Johnson →
This entry was posted in R.I.P. and tagged bread & savagery, emmy award, How Sharper Than A Serpent's Tooth, Kiowa tribe, Mind Sifter, native american, R.I.P., Russell Bates, SciFi, star trek, Star Trek New Voyages, Star Trek The Animated Series, TAS, The Holiest Thing, trekkie, Walking Bear, walking bear running wolf, wayne w johnson, WWJ. Bookmark the permalink.