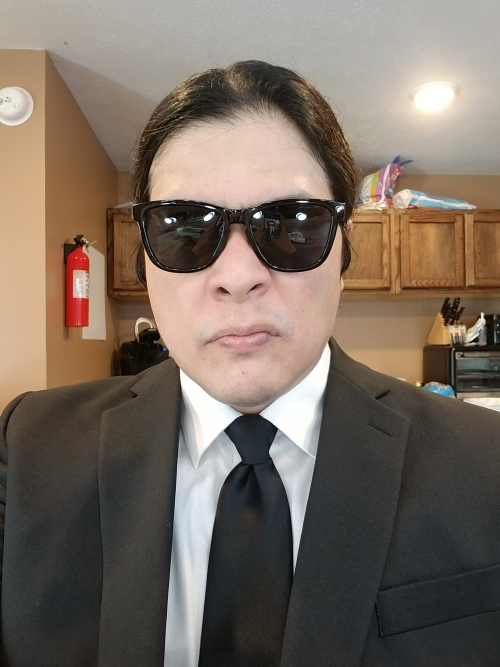 -Back in March 2020, I was contacted by acclaimed director Justin M. Seaman (“THE BARN“) in regards to a role he had me in mind for in a film he was doing called CRYPTIDS. We were actually discussing a few other possible roles when this was brought up. Originally, shooting was to take place at his filming studio at NEVERMORE PRODUCTIONS FILM LLC in Pennsylvania (PA) on April 25, but the pandemic put a stop to that. Once things started to get more safe again, arrangements were made for me to come down and play the part of “The Man in Black” for one of the episodes (“Cryptids” is an anthology film). Things have changed for me in a large way since the events of 2019 but I was glad to be able to do this and headed out to PA in the wee morning hours of Sunday 7/19/2020 (5 AM – it’s a six hour drive one way). I was just hoping that Cuomo wasn’t going to declare PA one of the states on his list where, if you come back into New York, you have to spend 14 days in quarantine. That would’ve sucked…

-So I get there and, as I tell them when I arrive, this area must of been built back when everyone was 5’5″, not to mention driving Yugos and maybe Mini Coopers 😀 . My GPS also gave out on me, for awhile, just upon entering PA but I was on the same road for awhile and it finally re-engaged. I will mention that, contrary to some of the pics, everyone was very careful in regards to masks and distancing. The masks were off while on camera and a quick pic here and there but all safety measures were taken. While I’d been in a booth next to there’s at various conventions (representing NIGHT OF SOMETHING STRANGE ), I’d never worked on one of Justin’s productions before so this was a first. Everything went great and they couldn’t have been more accommodating. Acclaimed director Zane Hershberger (FORCE TO FEAR) was also here (I thought I smelled Pert Plus when I walked in (HA!) ) 😀 There was also a mystery actor here who I can’t reveal till after the film is out. I have some pics in reserve and will post them on my Acting page on Facebook when the film is released.

-Things went by fast and, before I knew it, I was done. After a quick meal, I was back on the road to Syracuse. My GPS messed up again cause it told me I’d be back almost two hours before I actually was so I was wiped out when I got home. I want to thank Justin and everyone for the opportunity to be onboard and hopefully I’ll be able to work on some of those other projects we were talking about as well.

-Pics can be seen on my Acting Page on Facebook via the link below.

Hiya-this is WWJ & thanks for dropping by to my site! I hope you enjoy your visit to my home away from home online. If you have any questions, comments and /or concerns about this site, please let me know via the CONTACT page. Thanks & best wishes to you & yours!
View all posts by Wayne W. Johnson →
This entry was posted in ACTING, FILMS and tagged acting, Cryptids, Cuomo, Force to Fear, horror, horror film, horror movie, indie film, Justin M. Seaman, Men in Black, Mini Cooper, Nevermore Productions Film LLC, New York, night of something strange, Pennsylvania, Syracuse, The Barn, The Man in Black, wayne w johnson, WWJ, Yugo, Zane Hershberger. Bookmark the permalink.