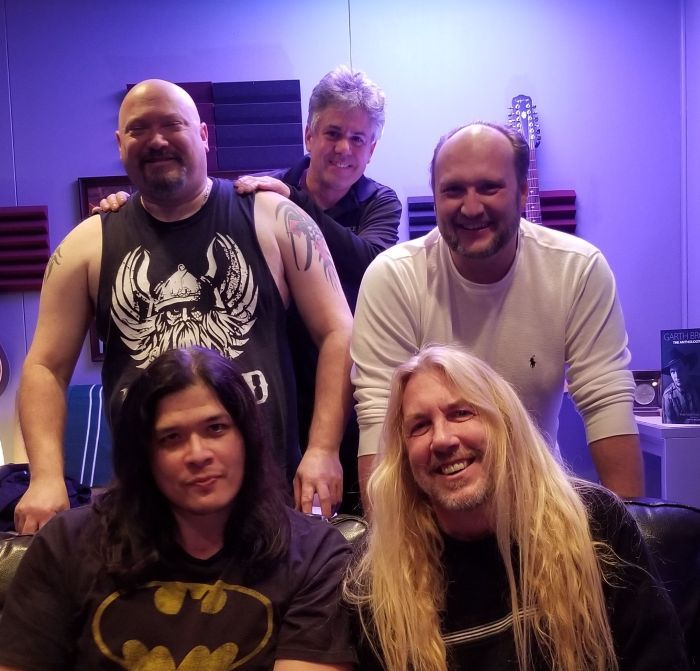 -Last Saturday (11/30) I entered SILVER CITY STUDIOS to start recording on four tracks for a new covers CD by the band BETWEEN WORLDS. I officially became their bassist last month. I can’t name the tracks as of yet, but we did get the drums, scratch rhythm guitars and bass down for three of the four tracks. All of the tracks on this CD are rock/hard rock/metal songs with some deeper cuts thrown in. This is being produced by studio owner Robert Capezzano and Between Worlds manager Blaine Wiggins (CEO of MY FISH RECORDS-of whom Between Worlds is signed to). By the way-for those who are wondering-I’ll put down how I joined the band in a later entry…

-Save for the time I was in Emmett Van Slyke’s home studio in November 2017 to lay down the tracks for the CAROLINE BLUE song “My Fingers,” I haven’t been in a recording studio since 2012 (I think…). Both Robert and Blaine were very easy to work with and a great set of ears to guide us towards the desired outcome. I got a great sound out of just my bass alone (and no Rob-I’m not selling it-HA!). I’ve heard that a few times now and it might be time to have that five-string Yamaha bass be used for recording only. I also have to say this was my first time recording under pinkish lights 🙂 – and it wasn’t just me that had that (I knew what you guys were thinking 🙂 ).

-Joining me in the studio were guitarist Roy Coston and drummer Mike Merrifield-all of us being in the band Four Large Men back in the 1990s. The last time we recorded together was probably around 1995-6 but things just fell into place like 20 plus years hadn’t gone by. Rob even said Mike and I, at one point (and while doing separate takes on a track), made a mistake at the exact same place. As Mike told Rob, we’ve done a few gigs together 🙂 Not to say that there were a lot of mistakes mind you… If anything, I’m the rusty one in the ring, per se, since venturing into the acting world. Having said that, this was a great environment and great people to work with so no pressure \m/

-I’ll be heading out there again in the coming weeks (and as schedules permit) to crank out the remaining bass tracks with Mike. It would be great to also be around when Roy, guitarist Scott “Rif” Miller, and guitarist/synth/keyboardist Justin Zych lay down stuff (yes-this band has THREE guitar players). Of course, if possible, I want to be there when vocalist Ronny Munroe (Metal Church/Trans-Siberian Orchestra) lays down stuff-and hopefully I’ll be able to partake in doing some backing vocals as well…

Hiya-this is WWJ & thanks for dropping by to my site! I hope you enjoy your visit to my home away from home online. If you have any questions, comments and /or concerns about this site, please let me know via the CONTACT page. Thanks & best wishes to you & yours!
View all posts by Wayne W. Johnson →
This entry was posted in Between Worlds and tagged Between Worlds, Blaine Wiggins, CAROLINE BLUE, covers cd, Emmett Van Slyke, Four Large Men, Justin Zych, metal church, mike merrifield, music, My Fingers, My Fish Records, recording, Robert Capezzano, Ronny Munroe, Roy Coston, Scott Rif Miller, Silver City Studios, trans-siberian orchestra, wayne w johnson, WWJ, Yamaha. Bookmark the permalink.