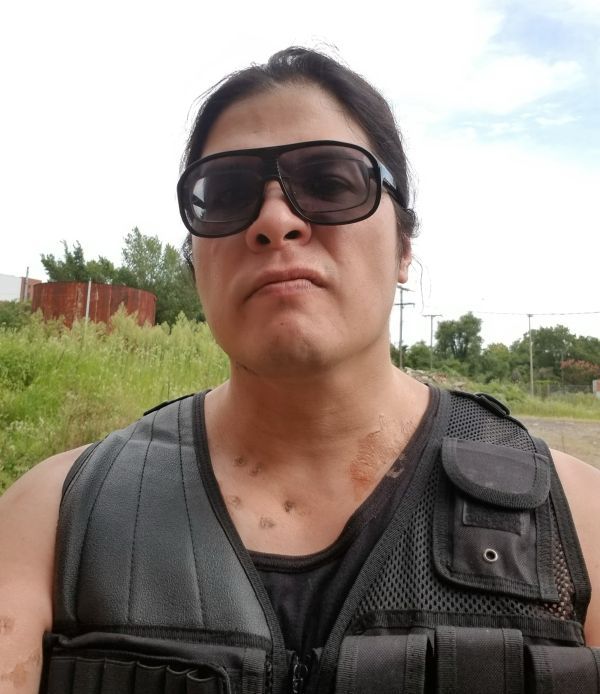 -8/9-8/11, 2019 – Back in Virginia again for final pickups and ADR (Audio Direct Replacement) for JOHNNY Z . I had a MUCH better fuel-efficient car this time, but the overall costs were higher. It happens…The two scenes I had to do were knocked out quickly, although on the second I was starting to doze off at times. One can only go on with lack of full sleep for so long…Kind of nice that I was told I looked like a “Terminator” at times. Any Terminator Fan Films in need of actors? 🙂 After all that we went back to Jonathan’s to do ADR. I had one line to do from a scene at the prison and I got it quick. Not to brag, but I’m good at ADR (*knoc on wood=my head-HA!*) and, unlike most actors I know, I don’t have a problem doing it. If that’s what it takes so people can hear me loud and clear, give me more. I’ve been on enough productions where the sound was spotty and it, to be blunt, sucks. Then I had to do ADR for the final fight scene-not only the line I had, but all the grunts and noises I made during the fight. It was done in two takes-and the only reason it took two takes cause, on the first one, Jonathan forgot to hit record 🙂 And with that, I should be all done. Hope you guys get to see this one-it’s looks awesome! Thanks to all cast and crew on this one and I’ll probably see many of you when we start on “NoSS 2.”

Hiya-this is Wayne W. Johnson (WWJ) & thanks for dropping by to my site! I hope you enjoy your visit to my home away from home online. If you have any questions, comments and /or concerns about this site, please let me know via the CONTACT page. Thanks & best wishes to you & yours!
View all posts by Wayne W. Johnson →
This entry was posted in ACTING, FILMS and tagged acting, ADR, horror, horror film, horror movie, Johnny Z, jonathan straiton, MARTIAL ARTS, Monster Boy, Terminator, virginia, wayne w johnson, WWJ, zombies. Bookmark the permalink.