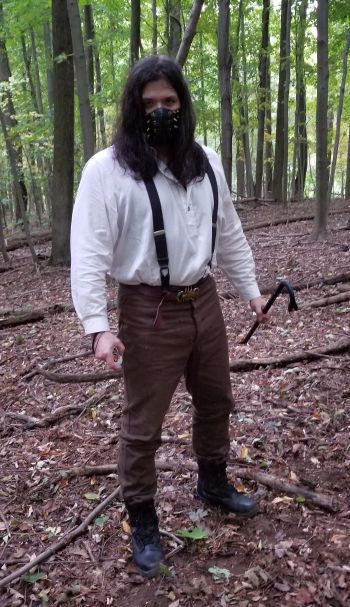 -I was initially contacted for acting in a short film called “She Dances with Matches” (Originally called “Hex”) by director Frankie Heagle via my Backstage.com profile a few months back. We discussed the particulars and how it’s actually the tail end of a much larger feature film that he’ll be looking to get financing on in the future. Whether that means me returning for that that or not is unknown. I had a preliminary meeting with him and gave him my ideas on my “look” and then went about turning that into a reality as well as getting ready overall.

-10/6/2018-The first day of filming was out in Sterling, NY with a call time of 6 AM. I found out real quick that running while wearing that mask wasn’t the easiest thing to do 🙂 I also accidentally ripped my pants right in the middle-to where by the end of filming this day I could put my fist thru it. Good thing I’m not one of those guys that likes to go commando underneath their pants or this would’ve been a very different type of film (HA!) 🙂 It was a fun time and Frankie has a good cast / crew with him. Unfortunately, it started to rain as we approached the halfway mark of my scenes outside so we’ll have to re-schedule to finish that part off. I did get the pants repaired so that was good. This next time I believe there will be some FX makeup on my face so it should be interesting.

-Pics can be seen on my Acting page on Facebook.

Hiya-this is WWJ & thanks for dropping by to my site! I hope you enjoy your visit to my home away from home online. If you have any questions, comments and /or concerns about this site, please let me know via the CONTACT page. Thanks & best wishes to you & yours!
View all posts by Wayne W. Johnson →
This entry was posted in ACTING, FILMS and tagged acting, Frankie Heagle, horror, NY, Roy, She Dances With Matches, short film, Sterling, student film, SUNY Oswego, wayne w johnson, WWJ. Bookmark the permalink.