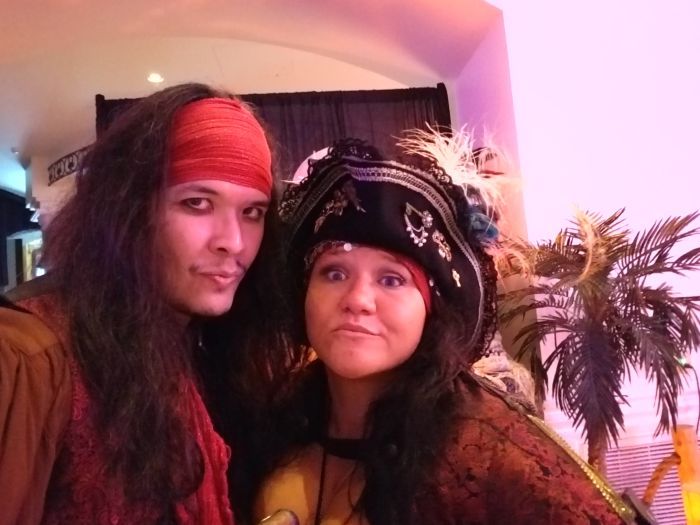 -I was invited once again by PIRATE QUEEN QUIGLY to be part of the crew at Pirates Weekend at EXIT 33 (TURNING STONE CASINO) in Verona, NY on Saturday 9/15/2018. I reprised my role as “Johnny Red”-but with a different look this time. There were many things different this year-less crew, no dressing room, one day instead of two and only being in the Lave / Tin Roaster /The Gig areas. There were also some familiar faces like CAPTAIN JACK FOR HIRE CNY , Jim Hanselman and Craig Loomis. There was also an undead pirate here, but I never saw him out of costume. All of them, as well as Miss Quigly of course did great-as usual.

-I think I did OK. With the events that have happened in the past 10+ months, I was a little rusty on both accents and live improve but I believe I held my own. Since I was on “duty,” I wasn’t able to take a lot of pics. I did pose for a number of them from others though-which is always very flattering cause, in a lot of ways, I’m basically the “unknown pirate” compared to the others here. I got called “Captain Jack’ three times and each time I thought, “You’re drinking some hard stuff there laddy.” 😀

-Overall I had a good time-which flew by after the initial hour real fast. It’s always a trip to play a role that’s not like yourself-and there’s definitely some parts of “Johnny Red” that are not me at all but hey, that’s all part of the fun right? 🙂

-Some additional pics can be seen on my Acting page on Facebook via the following link.

Hiya-this is WWJ & thanks for dropping by to my site! I hope you enjoy your visit to my home away from home online. If you have any questions, comments and /or concerns about this site, please let me know via the CONTACT page. Thanks & best wishes to you & yours!
View all posts by Wayne W. Johnson →
This entry was posted in ACTING, THEATER and tagged acting, booty, Captain Jack For Hire CNY, Craig Loomis, Exit 33, Jim Hanselman, Johnny Red, live performance, NY, Pirate Queen Quigley, Pirate Weekend, pirates, Pirates of the Carribean, Turning Stone Casino, Verona, wayne w johnson, WWJ. Bookmark the permalink.