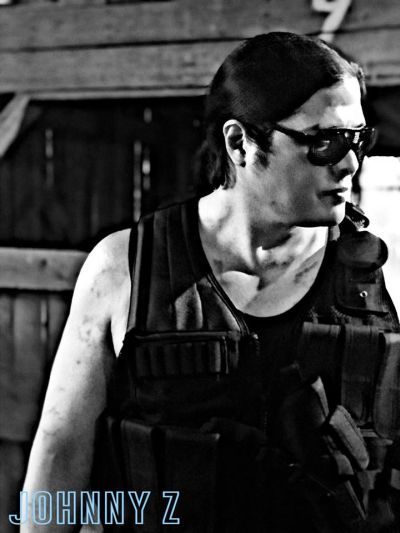 -7/4-7/9, 2018 – I was now coming back to Virginia to finish off my scenes with JOHNNY Z (HURRICANE BRIDGE ENTERTAINMENT) as well as some re-shoots. After a grueling bus ride, I got in and got some sleep before my first day on set. This was at an abandoned correctional facility and it was a trip being there. I was told the new facility was not too far away. Wish I had a cell phone cause I would’ve gotten a lot of pics…The heat wave was still going on and it hit pretty hard here-no ventilation and we were there for around 12 hours. I was sweating so much that, just standing there, the makeup for my “teeth marks” started peeling off me within five minutes. We did the best we could though. I felt bad for actor David McMahon cause, while he didn’t have to wear it all the time, he had to wear a fur coat while on camera. A lot of time spent on one scene-which we weren’t able to finish till the next day-which was just as hot, but only for half the day. Midway thru a thunderstorm came thru, which cooled things down, but also later on brought rain so when we were done we had to partially pack and load things up in the rain-which was around 3-4 AM (we had to get all the prison shots done this day cause the location would be lost otherwise). The second day brought a role for me to play that I’ve never played before – a dead female doctor. Just let the hair down right. Knowing Jonathan, he’ll probably CGI some fake boobs on me (HA!) 🙂

-On the second day, though, I started to have frequent bouts of being lethargic. I spent most of my time sitting in a chair and dozing off-there’s even a pic of me doing that). I don’t know what happened. I was able to hang in there and even help out a little with the packing / loading up at the end. My body temperature was all out of whack on almost all the days here. One minute I’d be burning up, then I’d be freezing. Even on my last day, when me and actor Trey Harrison were just standing in place at the start of filming to get camera focus, Trey said to me, “How are you sweating so much?” Wish I knew cause I honestly don’t know if it’s healthy or not.

-On the third day I had off, so that was a good chance for me to recover. I spent most of that day sleeping-which is good and bad. Good cause it gave me a chance to rest and recover but bad cause I shouldn’t have been sleeping that much. It was probably a combination of weather and all sorts of things that have been hitting me for several months. I’m just glad this didn’t hit me the last time I was here during that big fight scene.

-The fourth day found me and the gang at the barn. My scene was the last to be hit on so I had time to rest. No lines, just movement. It was easy and I’m glad cause I still was way from 100% at this point. The weather was much cooler than that first day and there was always plenty of water on set (made the mistake of having a Coke on the first day-UGH!). We actually got done kind of early this day so that was good.

-The last day. Time flies and the wrap day (for me) is always a bittersweet day. We started out later in the afternoon. Actor / producer Jason Delgado treated me to a movie-which was cool (thanks!)-before we had to be on set. Again the weather was decent, although I was still sweating a lot. We were at the barn / house again, but the first couple of scenes to film-where I had dialogue-had a change of scenery from where the script originally said. It took some time to light properly-especially once the sun went down, but we got thru it. It was pretty much the rest of my dialogue along with Trey’s and a special guest appearance by actor Wes Reid. The final stuff I had to do was at the house and it was kind of freaky being there again-at least for awhile. I’ve said in the past I have this weird detachment when I see myself on the screen-like it’s not me. Well, it extended to where I felt like it wasn’t me who went thru all that stuff during the fight scenes the last time I was here-like it was someone else. It’s really weird… The re-shoot that had to be here didn’t take long, but by this time it was past midnight-and my bus was scheduled to leave at 1:25 AM. Jason volunteered to take me to Jonathan’s and then to the station-which overall takes about an hour and a half or more. I wasn’t too worried, but we were pressed for time so I just changed closed, put on some kind of deodorant so I wouldn’t be “too funky” (while still having “bite marks” on my arms, neck and face) and away we went. No worries-the bus didn’t leave till 2 AM. It was packed and, unfortunately, I didn’t get any sleep on the way to NYC.

-Another thing that I noticed happened, to a degree, when I was playing the dead doctor, but it reared it’s head at the station-I was getting short of breath. Like I couldn’t take a long breath without feeling discomfort-and I couldn’t hold my breath for as long as I normally could. I’d also developed a dry cough while I was here so that didn’t help cause my throat was really dry on the bus. I also wished I didn’t have to leave so abruptly, but that’s not new for me-but it would’ve been nice to have a little longer to say goodbyes and thanks-cause this cast / crew was awesome.

-The bus arrives at NYC at 8 AM and I’m glad I choose to be towards the front of the bus cause a fight breaks out between two African-American women towards the back. I get my luggage and go inside while 20 plus cops arrive. Gotta love it huh? Port Authority was VERY crowded at this time. After two hours, I catch the bus to Syracuse-and the Wi-Fi was actually working! Of course, even under home Wi-Fi that damn Kindle Fire acts like it’s on dial up (at least the apps). This time I did fall asleep sporadically for the next four hours. I got home and fell into a deep sleep.

-I want to give a huge thanks and shout out to all the cast and crew involved with “Johnny Z.” It was great working with all of you and I hope to do so again on future productions. As I mentioned before, this shoot has now taken the “top spot” on my “hardest shoot I’ve ever had to do” (replacing NIGHT OF SOMETHING STRANGE) and will probably stay there for awhile…until “Night of Something Strange 2” 😀 Remember, you can still grab a whole bunch of merch on the JOHNNY Z INDIEGOGO PAGE. Pics can be seen on my Acting page on Facebook via the following link…

Hiya-this is WWJ & thanks for dropping by to my site! I hope you enjoy your visit to my home away from home online. If you have any questions, comments and /or concerns about this site, please let me know via the CONTACT page. Thanks & best wishes to you & yours!
View all posts by Wayne W. Johnson →
This entry was posted in FILMS and tagged 2018, acting, bus, David McMahon, Felix Cortes, Greyhound, horror, horror film, horror movie, Jason Delgado, Johnny Z, Johnnyzmovie, jonathan straiton, Kindle Fire, MARTIAL ARTS, Michael Merchant, Monster Boy, New York, night of something strange, NY, nyc, Pohawtan, port authority, Prison, RON BONK, Syracuse, Trey Harrison, virginia, wayne w johnson, Wes Reid, WWJ, zombies. Bookmark the permalink.