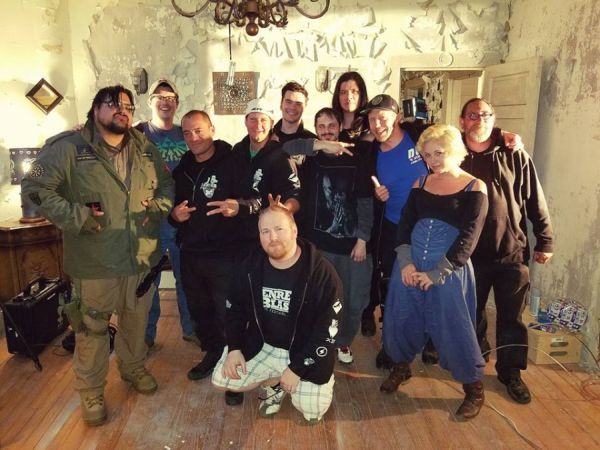 This recap actually starts , albeit briefly, way back in 2011 while I was filming with the horror / comedy film “NIGHT OF SOMETHING STRANGE. (NoSS)” The director, Jonathan Straiton, had asked me if I wanted to be a future movie called “JOHNNY Z.” I said yes and then continued getting coated in huge amounts of blood and gore 😀

-Fast forward to 2017. Jonathan sets into motion pre-production for “Johnny Z.”-a horror zombie martial arts film that has a much more serious tone than NoSS. Jonathan didn’t want to be stuck as “that guy who can only make totally gross sexual zombie flicks” – although I’ve been told that demand for “NoSS 2” is high. A gutsy move-but I believe it’s the right one. Jonathan asked me to do a PSA video for the Johnny Z Indiegogo campaign. I was in the midst of a “detour” off what I call “The Path” and it took me longer than it should have to make one-and when it came time to do so, I’d just had some old guy cough right in my face a few days prior. This resulted in me losing all of the high range in my voice, as well as a good chunk of the mid range. Check it out via the link here (pls feel free to like / comment / subscribe to my You Tube page BTW…)…

-In addition, the Indiegogo campaign for Johnny Z is still ongoing and has a lot of really cool perks as well as a lot of insight into what’s happening with the film and what’s in it. Check it out via the following link…

-Then we get to 2018, where I was almost unable to make it to filming. I managed to get my sh*t together-at least to where I could get out to Virginia for the first block of filming. My last time to Virginia was via rental cars-this time it would be by bus. Basically, each trip was 13 plus hours. I left Syracuse on Saturday 4/28/18 at 8:10 AM and arrived around 10:00 PM in Richmond. The trip there wasn’t too bad. I had plenty of time to catch my connecting bus and being in Port Authority in NYC again brought back some memories.

-I spent two days in the dorm buildings where I was with several other members of the cast / crew and then the other two days at Jonathan’s place. I was introduced to several new faces over the shoot-cast and crew. I’m happy to report that everyone was great to work with-no divas (except maybe me-HA!). Of course, it was also a mini “reunion” with members who were involved in NoSS-and I was told that this “NoSS” core was all going to be working again on a future project (vague statement is…vague… 🙂 ).

-I’m playing the role of “Monster Boy” in this film. He’s basically an enforcer for Vin ( actor Trey Harrison). During this block I guess I had to accept that I’m a “big guy.” I know I’m bigger than I was during the NoSS years, but I still-mentally at least-don’t consider myself as being a “big guy” per se. It was pretty much drilled into my head here so I submitted to it 🙂 I was also told I seem to have this habit of slamming car doors shut too hard 🙂 I didn’t know exactly how I’d look like or what I fully had to do during this block till I got there. Finding out that the FX and makeup was being done by Marcus Koch-who I worked with on “HOUSE SHARK” (SRS CINEMA LLC) and MOHAWK (DARK SKY FILMS / SNOWFORT PICTURES)-which was a relief cause I knew I was in good hands. \m/

-On my first day here, I was basically in “Hurry Up and Wait” mode-till I was basically released for the day. It happens and it was fun just to see what the others were doing. It became surprisingly cold during the nights, but they had some propane heaters in a room so that was a big help. Dominos pizza was for dinner this night and Chinese food the next. I got an interesting fortune (check the pics) :). The next night saw me on set in action.

-I have a line in this one (and some more thru out the film), but the biggest part for this night was being in a huge fight scene. While I do have have some martial arts training and have done some fighting in previous films, this was a whole different level. Felix Cortes (one of the main leads) is a Master of FILIPINO COMBATIVE ARTS and has done stunt work for multiple projects. One of his nicknames is “Iron Felix” and my arms were sore from days blocking his attacks (not even going full out)-not to mention he’s really fast. He can slice you up before you even start with your first move. In addition, members of the DC STUNT COALITION (DCSC) were also here to coordinate all the fight scenes-so I was really looking forward to seeing what I could learn and hopefully be able to keep up with them. Rehearsals for the first half of this fight (which is basically broken down into three sections) was at least an hour if I recall (maybe two). Both Felix and Dylan Hintz (the leader of the DCSC team) were both very patient and easy to work with. What’s great is not only did we go over the fight choreography piece by piece, but I was shown the effectiveness of what I was doing-whether offense or defense. In addition, what I was doing-which is based on various forms of Karate I’ve trained in over the years-was a nice contrast to what Felix was doing. They didn’t have me learn a whole new style (which would have been OK if they did), but basically take what I knew and augmented it as to be effective for this fight. It was a lot of fun, but I was still a touch nervous when the time came. I was told I did well afterwards so that was a relief 🙂

-I obviously can’t detail the fight scene at this time, but I will say that, after each take, we all got to watch the playback via the monitor and offer our thoughts. It was also quite the workout in several ways. I worked hard in a gym for the last three months to erase the damage done to me during my “detour off The Path” and, while I’m not where I want to be, I’m getting there and that work did me good here. Remember when I mentioned that the first half of this huge fight scene was in three sections? Part of this was me fighting with actor Jason Delgado-a big guy. He was pretty intense-and it was like I was getting hit with karma to a degree cause I kept thinking “So this is what some of the others had to receive from me during NoSS.” 😀 Unfortunately, as we were closing in on this section, the generator ran out of gas. Then we discovered it was past 5 AM and actress Ellie Church had to get her remaining scenes done cause she was leaving to go home in five hours-which she got done quickly. This was the first day where filming ran so long and I joked that with me, Jonathan, Trey, Michael Merchant and Brett Janeski on the same set as Jonathan, the “NoSS factor” had kicked in (there were multiple shoots with NoSS where we weren’t done till 6 AM or later). I was already slated to come back during the second block, but now I have to come back sooner to complete this huge fight scene. All I can say is, once this whole big fight is filmed (and I survive-HA!), it’s gonna look fricken awesome 🙂

-The days flew by so fast here. While things were a little behind schedule, they weren’t-as Jonathan said-“NoSS behind” (that production got behind big time on the first day). There also weren’t as many takes like in NoSS so that was cool. Jonathan is using a RED Dragon on this one (NoSS was using Canon 5D’s (Mark III’s I think?) ). I heard that a tornado warning happened one day-which ground filming to a halt. In addition, Felix was called away for two days to work on an episode of DAREDEVIL (Season 3-Netflix) so another slight delay. Overall, everyone was cheerful and pleasant to work with and I’m really looking forward to the other blocks.

-The last day of filming on this was just me, Jonathan, Trey and Marcus. The generator ran out of gas again, but we were just filming one scene so that didn’t take too long. I got, maybe, five hours of sleep, before I was riding with Jonathan to the bus station. Traffic was bad and I barely made it by the departure time-but it took another 30 minutes till we actually left. There were so many people in the line…In addition, there were several delays-including where the bus driver, while going over the safety procedures, got into an argument with some loudmouth who basically wanted the driver to stop talking and get the AC on. I was concerned, for awhile, that I wouldn’t be able to make my connecting bus from NYC with all the delays; even the rest stop in Delaware was delayed. I got into Port Authority and rushed over to the right gate (I was told by a clerk the wrong gate initially) just as they were starting to board. The bus ride to NYC was quite crowded, but after that, the trip to Syracuse it was easy. Jonathan had asked me if I was sore the next day after the fight and I said no, but then I took a nap later on that day and, when I woke up, I was sore till the next day after I got home. I have a few scratches and bruises on me as well-even a cut on my forearm where, during the fight scene, someone pointed out that I was bleeding. I didn’t even notice…

– I was also part of a video interview with Trey by Nathan Ludwig, the festival director for the GENREBLAST FILM FESTIVAL, so be on the lookout for that (unless it’s part of the specials with the blu-ray release). I had a great time and feel very fortunate to have worked with all the people involved in this. “Johnny Z” has a very modern feel to it and, I believe, will be well received. Keep checking out for news and updates on the Johnny Z page on Facebook. Pics from the shoot can be seen on my Acting page on FacebOok.