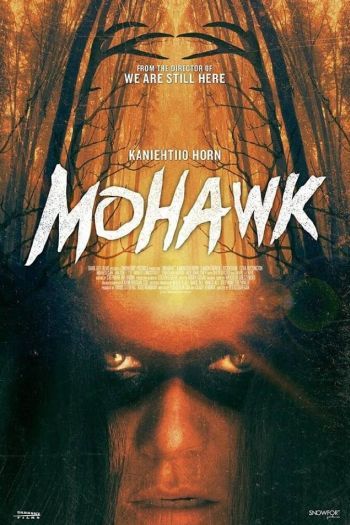 MOHAWK premiered in several theaters on Friday 2/16/2018 – one of them being THE PALACE THEATER in Syracuse, NY. In addition, director Ted Geoghegan was in the audience in Syracuse and did a Q&A after the movie. I showed up late and missed my scenes, but was told that “Mohawk” will be available on VOD on March 2, as well as a second premiere at the Palace that same day. Here’s a quick overview I wrote on my acting page on Facebook about the premiere…

One of places “Mohawk” had a premiere was right in Syracuse, NY at The Palace Theater. Doors opened at 7 PM and I arrived at around 8 PM-cause that’s normally what happens at premieres there. Unfortunately, they started earlier and I arrived 15 minutes after my scenes 😦 It’s OK though-I can wait a few more weeks when it’s released on VOD. I was also told from several scene that I did very well so……What I did see of the movie was great-very well made and all around great job from cast & crew. It was also great to see that my name was in the credits as well. After the Q&A I got a chance to chat with director Ted Geoghegan , director of ceremonies Tyler Dane Sutton and even chat with some of the crew. I also want to say that some of the stories that people in the audience were saying in regards to the movie were very touching. Looking forward to working with everyone involved in future projects as well as the release of “Mohawk” on VOD on March 2- in which I’ll be able to release a few pics I’ve been holding onto for a few years 🙂

Hiya-this is WWJ & thanks for dropping by to my site! I hope you enjoy your visit to my home away from home online. If you have any questions, comments and /or concerns about this site, please let me know via the CONTACT page. Thanks & best wishes to you & yours!
View all posts by Wayne W. Johnson →
This entry was posted in ACTING, FILMS and tagged acting, mohawk, NY, premiere, Syracuse, Ted Geoghegan, the palace theater, wayne w johnson, WWJ. Bookmark the permalink.