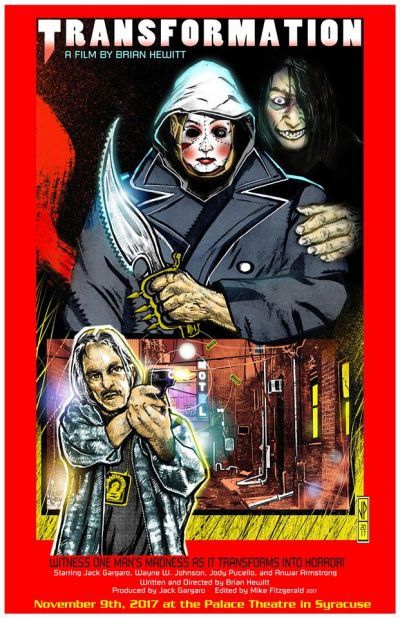 -Back in 2012, I got involved with a film called “Transformation” by HEWITT FILMS and directed by Brian Hewitt. It was only a year since I’d officially jumped into the “deep end” of acting so I was working to get into any project I could set eyes on. I’d already filmed with Brian on “Rise Up & Fall” and this was just the logical progression for that. In addition, Jack Gargaro was on board for this-and he was one of the factors that made me jump into the “deep end” in the first place. His encouragement and support was a very important part of that. I specifically remember Brian telling me that “Transformation” wouldn’t take as long to release as “Rise Up & Fall”…

-Fast forward to 11/9/2017 😀 . “Transformation” has it’s premiere at THE PALACE THEATER in Syracuse, NY. So many things have changed since 2012. I wasn’t even sure how my performance would be, since it was so long ago and I even borrowed a few elements from my role in this as “Malachi” for the role of “Draven” in the film “Empire State of the Dead” (SRS CINEMA LLC). The biggest difference, sadly, was that Jack had passed away this past April. I was told that, while he didn’t see the final edit, he did see the complete rough edit. Having said that, I wish he was there to see it. I know he would’ve been proud and he did an awesome job in the film.

-I also ran into a good amount of people I’d worked in past projects-most of whom were also in “Transformation.” Back in 2012 Brian had used an older camera (I believe it was a Canon XL1 Mini DV Digital Camcorder 3CCD)-so it did have that older look to it. Some cool effects and it was cool to see the entire story (Brian is notorious for only release parts of the script to his actors-so even I didn’t know how the whole movie would go). That was a tad awkward when I was being video interviewed by Webcam Nick and he asked me what the film was about. 🙂 Due to a massive traffic jam on 690 E., I unfortunately missed a cool interview with the G33kpod crew, but we talked about another one down the road…

-I had a great time and Brian and Michael Fitzgerald (who edited the film) did a great job with this. There was even a CAROLINE BLUE song (“Prey”) playing during the end credits. The audio of my laugh from this character was also used thru out and I got a lot of kudos for my role after the film had finished-which is always appreciated. No DVDs were available at the premiere, but keep a look out with Hewitt Films on that. If you’d like, feel free to go to the two photo albums I have for “Transformation” back in 2012 to see that recap and check out the pics.

Hiya-this is Wayne W. Johnson (WWJ) & thanks for dropping by to my site! I hope you enjoy your visit to my home away from home online. If you have any questions, comments and /or concerns about this site, please let me know via the CONTACT page. Thanks & best wishes to you & yours!
View all posts by Wayne W. Johnson →
This entry was posted in ACTING, FILMS and tagged acting, brian hewitt, Canon XL1 Mini DV Digital Camcorder 3CCD, CAROLINE BLUE, demon, Draven, Empire State Of The Dead, hewitt films, jack gargaro, malachi, Michael Fitzgerald, NY, premiere, prey, rise up and fall, serial killer, SRS Cinema LLC, Syracuse, the palace theater, Transformation, wayne w johnson, WWJ. Bookmark the permalink.