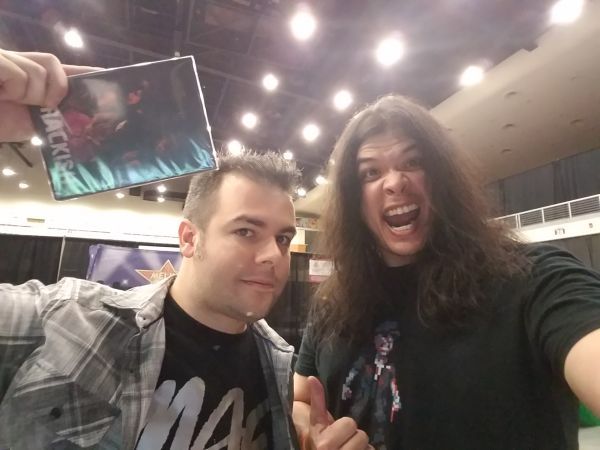 October 7, 2017-Due to a number of transitions happening in my life at the moment, I wasn’t originally going to be able to make it out to SCARE-A-CON this year. I’d planned to months earlier, even to where Heather R. from Asylum Convention and Entertainment Services – ACES- was asking if I wanted a table there. Once I heard NIGHT OF SOMETHING STRANGE (NoSS) was going to have a table, I told Heather no cause having two competing NoSS tables wouldn’t work. Unfortunately, Jonathan had to pull out around a week before the convention and, by then, it was too late for me to get a table which, even if I could’ve afforded it, I’m kinda low on my stock of DVDs as well as the afford mentioned transitions.

It was actually MAD ANGEL FILM‘s evil director Matt Peters that got me to come out for a few hours. Unfortunately, that’s not much of an exaggeration in regards to the hours. I did get to run into a number of familiar faces from last year as well as other conventions I’d been to earlier in the year. I do wish I had more time to hang out and chat with them all-maybe next year…I did manage to help a tad with sales on both the Mad Angel Films and SRS CINEMA LLC tables so that was good. Again, wish I had more time to help more. I did manage to sell some NoSS DVDs that I brought with me as well \m/

-I stayed for dinner with the Mad Angels team at a place called Noodles-good stuff-but I couldn’t stay after that, which sucked for a number of reasons-one of which was THE DIVES-a band with Paul Stanley’s son, Evan, in it-was playing a free show at THE GIG. I did pass by him in the foyer so that was cool.

-So even though my time was limited here, I had fun and it was great seeing some old friends here, as well as making some new ones. Hopefully next year I’ll be able to be here longer.

Pics can be seen on my acting page on Facebook

Hiya-this is Wayne W. Johnson (WWJ) & thanks for dropping by to my site! I hope you enjoy your visit to my home away from home online. If you have any questions, comments and /or concerns about this site, please let me know via the CONTACT page. Thanks & best wishes to you & yours!
View all posts by Wayne W. Johnson →
This entry was posted in ACTING, CONVENTIONS and tagged ACES, acting, Asylum Convention and Entertainment Services, CONVENTIONS, mad angel films, night of something strange, Paul Stanley, Scare-A-Con, SRS Cinema LLC, The Dives, The Gig, Turning Stone, wayne w johnson, WWJ. Bookmark the permalink.