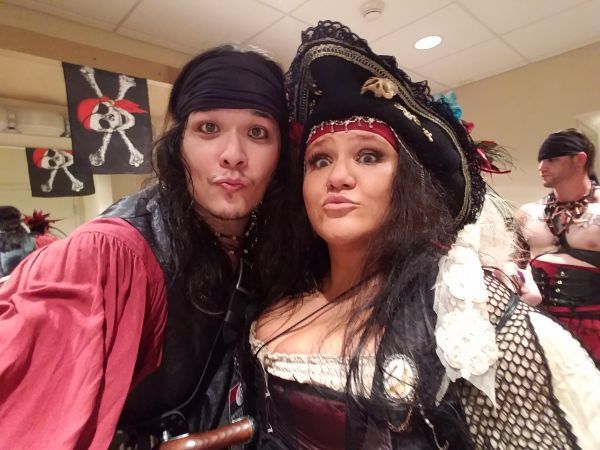 -Back in early July, 2017 I was contacted by Lynzie Q. (aka PIRATE QUEEN QUIGLEY) in regards to being part of her crew during Pirates Weekend at EXIT 33 at TURNING STONE CASINO. I’d never played a pirate before or had a gig at Turning Stone-plus it was paying as well as being free from other scheduling conflicts. In addition, I was told that I was also told that this could also lead to recurring gigs down the road as well so I said yes. I’d be playing the role of “Johnny Red”-her brother and second in command.

-I did pick up some DVDs of PIRATES OF THE CARRIBEAN for research but, truthfully, they didn’t help much character wise. Costume idea wise yes. Since this was more for entertainment and family friendly per se, I went with a more “flirty” type of pirate. In the past, Lynzie told me she’d had actors who basically paid attention to only “the pretty ones”-so I made sure to basically hit on everyone- young (over 18 of course) or old, male or female. It was a challenge to play in many ways cause, number one-I was basically improving the entire time. Luckily, I tend to say a lot of cheesy, sexual innuendo-type jokes as is, but I had to push that into overdrive here. The second point is a lesson I’d learned from the CAROLINE BLUE days-in which if I’m paying more attention to a woman, their men (more often than not) didn’t like that. If I even sensed that here (and even when I didn’t), I’d shift the attention to the guy-which almost always got a smile / laugh as well as rendering everything harmless. Of course, I could only do this while in “Johnny Red” mode. The costume just seemed to make it all legit.

-I met up with the rest of the crew and we had a number of days where we either got together to hash things out, go over arrangements and / or dress rehearsals. What I wasn’t able to get on my own (either buying or using parts of my ROMEO 3000 costume), I was able to borrow from Lynzie. I didn’t really have the full outfit and stuff on till the first night of the performance.

-On Friday September 15 I arrived and parked in the garage-too far away from the entrance. That sucked cause not only did I have to lug all the gear that distance, but had to basically do that twice cause I’d left my sabre on top of the roof of my car. If I didn’t see most of the group already outside, I would’ve been quite lost. As is, I got into the dressing rooms-which are quite nice by the way-and started to get into “Johnny Red” mode.

-I was able to get pics on the first night there, but the second night was way more crowded and I had to be “in character” the whole time so the cell phone went into my pouch for most of Saturday. Basically, all I had to do was interact with people-no events per se until Saturday. It was nice to go into a number of the places in here without waiting in line and getting searched-although, for fun, I let one of the female security members search me anyways 🙂 I was basically in five areas throughout.

-On Friday I went to THE GIG, where the band REDLINE was playing. I didn’t stay long cause, due to the loudness of the music, I couldn’t interact too much with people. On top of that, several people recognized me from the CAROLINE BLUE days-there was even an Ex-CB member in the crowd there-so it was a little hard to talk to them in “Johnny Red” mode. From what I heard, the band sounded great. GRIDLEY PAIGE played the next night but I wasn’t able to see them.

-On Saturday night I was able to spend some time in THE TIN ROOSTER, where THE BEADLE BROTHERS BAND was playing. One of the costume contests was held here-Best Ships Captain and Second Mate. I was in here for awhile cause I was one of the people who had to find people in a pirate costume and hand them a tolkien (an Exit 33 guitar pick) to get them into the contest. I’d never been in here before, nor seen a band playing their style of music, but it sounded great and had fun.

-On both nights I ended up in the LAVA DANCE CLUB. I wasn’t in there for too long Friday night due to the same problem in all the previously mentioned places, music too loud so as not being able to interact as well. I was in there more Saturday cause the “Best Booty contest” was in there and I again had to hand out guitar picks. I also ended up with some of the pirates, and the crowd, on the stage dancing (!)-which can be a little tricky when you have a metal sabre at your hip. I’d never been in here when it was live so this was an experience. This was also the area where the most drunk people were-at least that I saw.

-The outer area in-between all the above clubs (I don’t know the name) is where I spent most of my time on both nights. Just basically interacting with people. Got my picture taken by a good number of people. Even got my butt slapped a few times-as well as one woman trying to kiss me during a pic (she got my cheek cause I diverted my lips 🙂 This is also where famous CAPTAIN JACK FOR HIRE CNY Rick Martinez was here doing his thing. I heard so many people saying he looks just like Johnny Depp-except, as he would say, he’s taller and better looking 🙂 He does a really great job. Also on-hand was Jim Hanselman, who played Captain Barbossa-and who also was a dead ringer for him. I’m so glad he had the monkey on his shoulder-more than once I was talking to people and, if he was nearby, asked people if they’d like to not only meet him, but as to play / spank his monkey (HA!). I can tell you this much-it got a much better reaction than when I asked people if they could play / spank with mine (HA!) 😀 Not to mention there was skeletal “Jack Sparrow” on stilts (Craig Loomis)-that was a trip. I don’t think I could be on stilts for as long as he was.

-The last area was Saturday in the afternoon-The Atrium I think? It’s at the bottom where the escalators go from the event center. We were there most of the afternoon. It’s there I found out about the “no camera” rule. It was also the area where I did the most interaction. There were a ton of people there-and there was a reason why. I would like to take this time to thank BARRY MANILOW for performing this night cause it gave me so much to work with. It’s was cool that his dressing room wasn’t too far away from ours. I can’t remember how many times I asked people if they were here to see “The Manilow” and talked about how I tried to sneak into his dressing room to see his “rose covered bed” only to get thrown out by his security force-hence the security force in his hallway (I actually got a pic of that). Several people asked me if I could get them into his dressing room 🙂 It was a blast. Honestly, I actually like a number of his songs so it was just all in good fun. There were also some lovely ladies (Hannah & Shelby) from AMS MODELS AND TALENT here who were handing beads out to people. I even did that myself-although they did get tangled in my hair numerous times. I even ran into four more at the top of the escalator, but could only be there for a moment-I had to be in the other area, but more than once I started talking to someone, following them as I did, and then-after they left-turned around and either said “where am I?” and / or went back and the crew were gone.

– If there were any snags, it was mainly with the head scarf-my hair just doesn’t like to be contained. There were a couple of times I did wander off into an area that I wasn’t suppose to be in. At the first contest, which was for “Hottest Pirate Cougar,” Lynzie’s whip actually hit me in the neck twice-not at the tip, but it still stung. It happens. I only ran into a couple of rude people-and I wasn’t grabbed in my privates like some of the other crew were.

-Overall I had a great time-I have to give a shout out also to the great staff at Exit 33 / Turning Stone-they were all wonderful, helpful and quite tolerate of my bad jokes 🙂 The pizza after the gig was awesome as well. Big thanks to all the pirate crew-it was interesting watching them all do their thing. Many of them have done this before-this was my first ride. Special thanks to Lynzie for having me aboard. Hopefully we can all do this again in the future.

-Pics can be seen on my Acting page on Facebook via the link below.