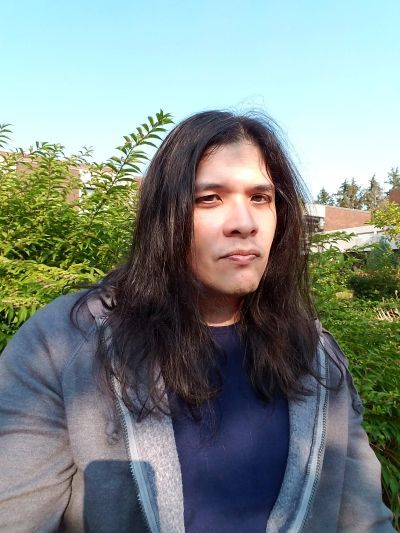 -Seven days before filming I got a message from director Ken Cosentino asking if I wanted to be in a short film / trailer that he was producing. It’s called “They’re Here” (WHITE LION STUDIOS)-a sci-fi theme that wouldn’t take too long, but had an early call time-plus I was told it was for the role of “Vincent”-one of the leads. It would also be out near the Buffalo, NY area. I’ve wanted to work on some past projects with Ken for some time-and even sent a video audition for a project that didn’t get off the ground- but for various reasons things didn’t line up back then so I said yes and started making arrangements to get there. (Biking was definitely out-HA!) 🙂

-I arrived just before the call time (8 AM) and saw a number of familiar faces- among them director Greg Lamberson (KILLER RACK-which, when I initially heard about it, was too late for me to audition) who I first met on the set of BATTLEDOGS-I still remember when, I think it was you Greg, who put me in “time out” for a scene or two on that set cause I was playing too many roles 🙂 BTW-Ken was also on that set and even mentioned remembering the day I got badly injured-a day I wish I could forget… ; actor Michael O’Hear (from past horror conventions), and soundmaster Michael McFadden (from “Mohawk”-who told me how to properly pronounce my character’s name from that -which I’ve already forgotten 🙂 ). Ken ran a very pro set up, which made things even easier during filming.

-I didn’t really have to do too much, per se, this day. Since I was told to look kinda bum-ish, I didn’t even put any makeup on (I’m sure that will pick up great on a 4K-YIKES-HA! 🙂 ) and had to be pretty much calm till the end. I got some nice kudos for my performance-which is always appreciated. Before I knew it, I was done. I did accompany the cast and crew to a place in the city (which was as congested as I remember) where we had lunch. Met a few more people from the cast, but I couldn’t stay for the rest of filming- as I had to be on the road cause duty called later that night and I was already on low fumes as is so…

-I had a good time and it was good to work with all that were involved. Maybe this will take off and evolve into a feature film-hey, you never know 🙂 Thanks to all and hopefully we’ll work together again down the road in future projects. Special thanks to Ken for thinking of me for this and hopefully- (based on the quote of you saying you’ve waited five years to direct me 🙂 )- you’ll be directing me in future projects before another five years-same with you Greg! 🙂

Pics can be seen on my acting page on Facebook via the link below.

Hiya-this is WWJ & thanks for dropping by to my site! I hope you enjoy your visit to my home away from home online. If you have any questions, comments and /or concerns about this site, please let me know via the CONTACT page. Thanks & best wishes to you & yours!
View all posts by Wayne W. Johnson →
This entry was posted in ACTING, FILMS and tagged acting, buffalo, cny, Greg Lamberson, Ken Cosentino, Killer Rack, Michael McFadden, Michael O'Hear, mohawk, movie trailer, NY, Sanborn, SciFi, short film, They're Here, wayne w johnson, White Lion Studios, WNY, WWJ. Bookmark the permalink.